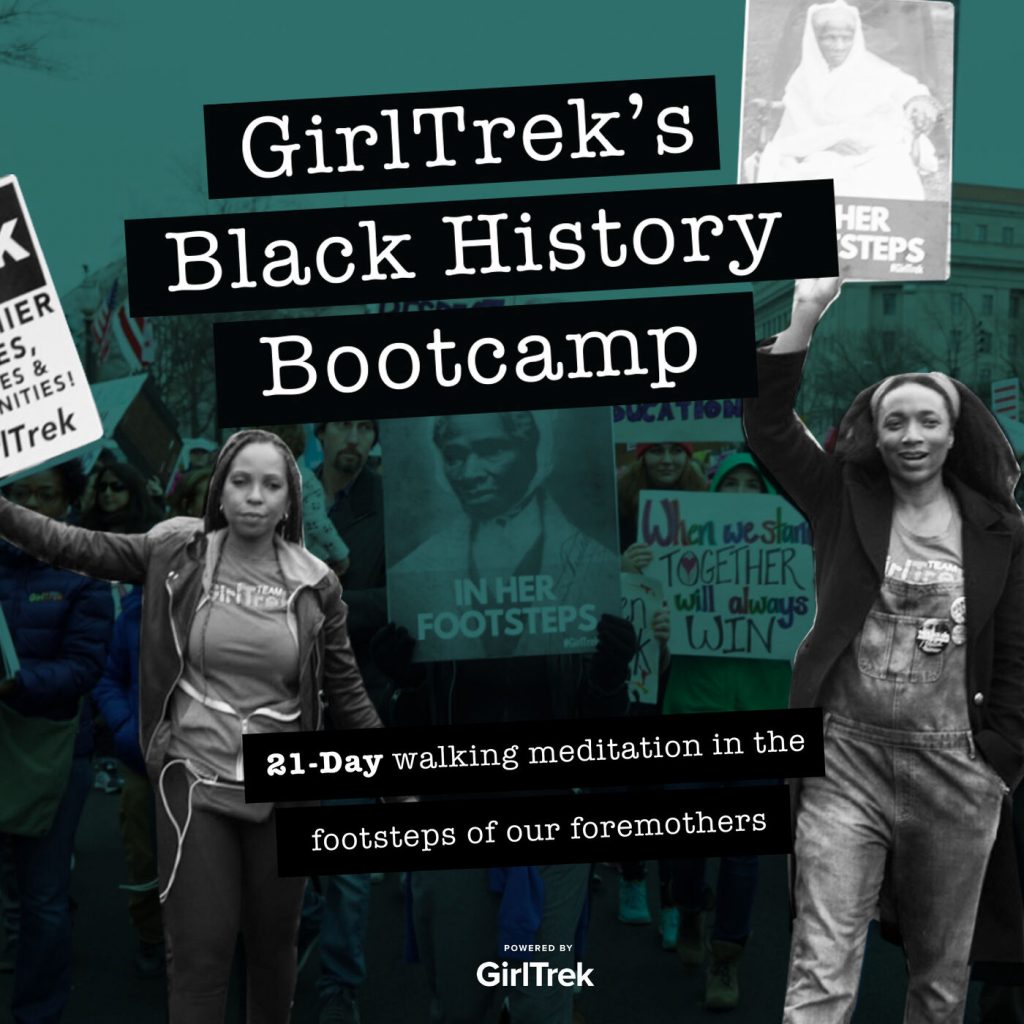 This year we set a goal to take over 1,000 of the Blackest neighborhoods. And we did that! With the help of our entire team. With the help of you! You made the decision to lead women in your neighborhood. You helped them start their own crew. And we want to celebrate every single one […] 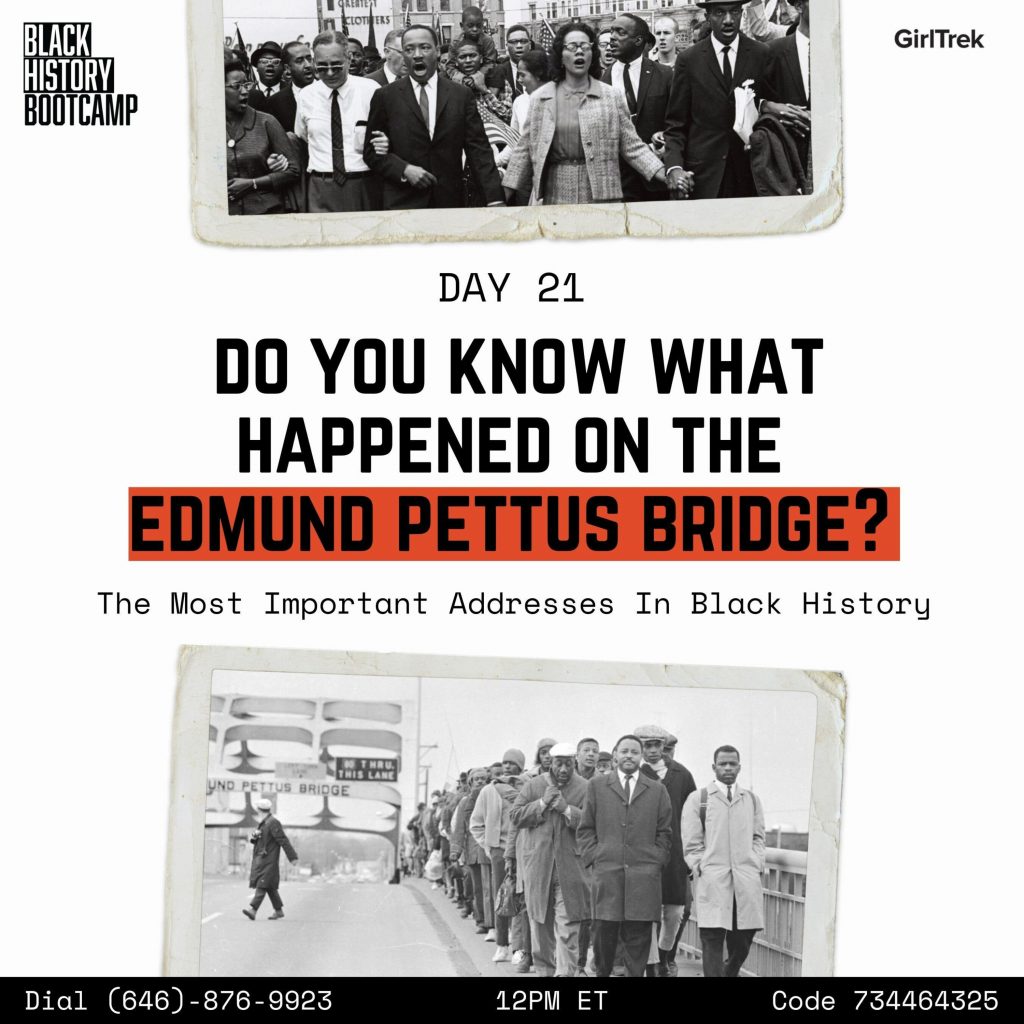 Day 21 The Address: The Edmund Pettus Bridge, Selma The Story: “You are a light. You are the light. Never let anyone—any person or any force—dampen, dim or diminish your light. Study the path of others to make your way easier and more abundant. Lean toward the whispers of your own heart, discover the universal […] 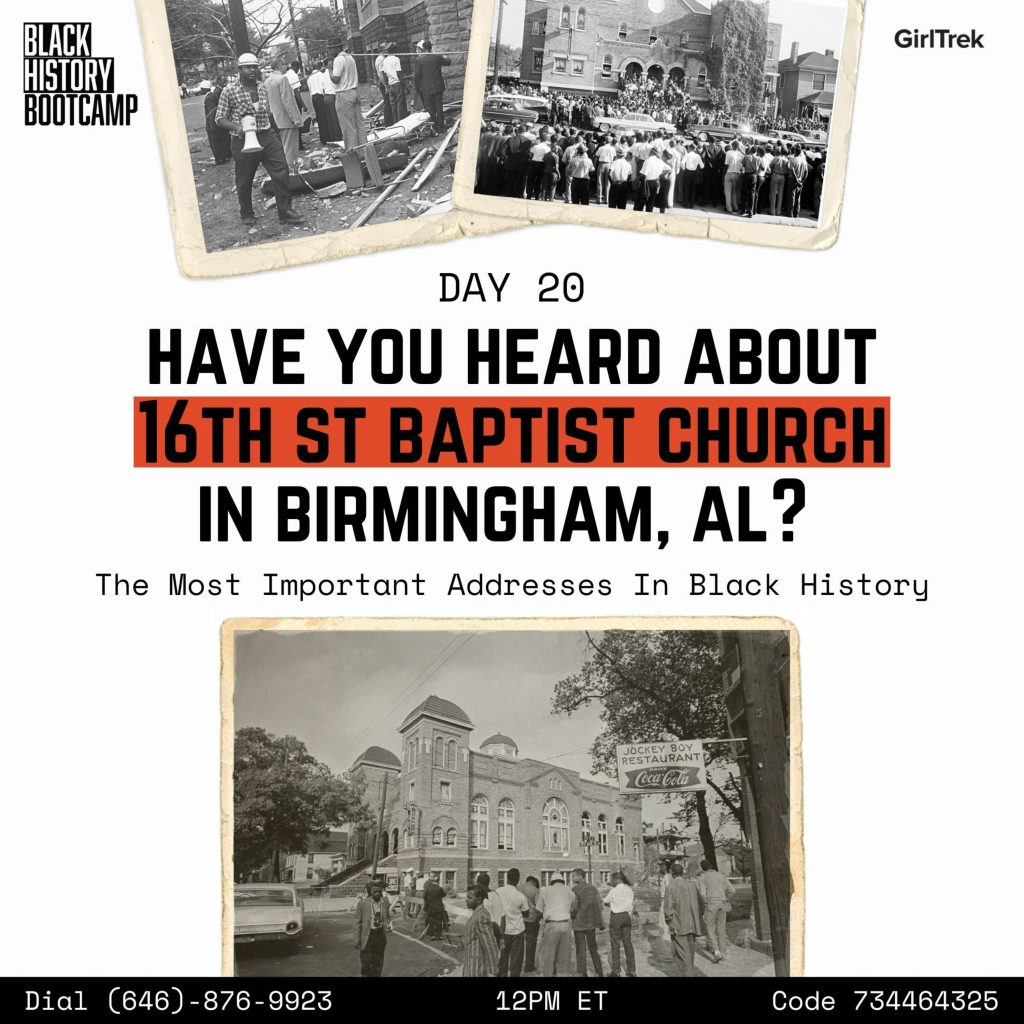 Day 20 The Address: 16th Street Baptist Church The Story: Their names were Denise McNair, Cynthia Wesley, Carole Robertson, and Addie Mae Collins. They were on their way to a basement assembly hall for closing prayers on a Sunday morning. The explosion occurred around 10:20 a.m. It destroyed the rear end of the building. It […]

Black Neighborhoods | Day 19 | Where did the Blues really start? 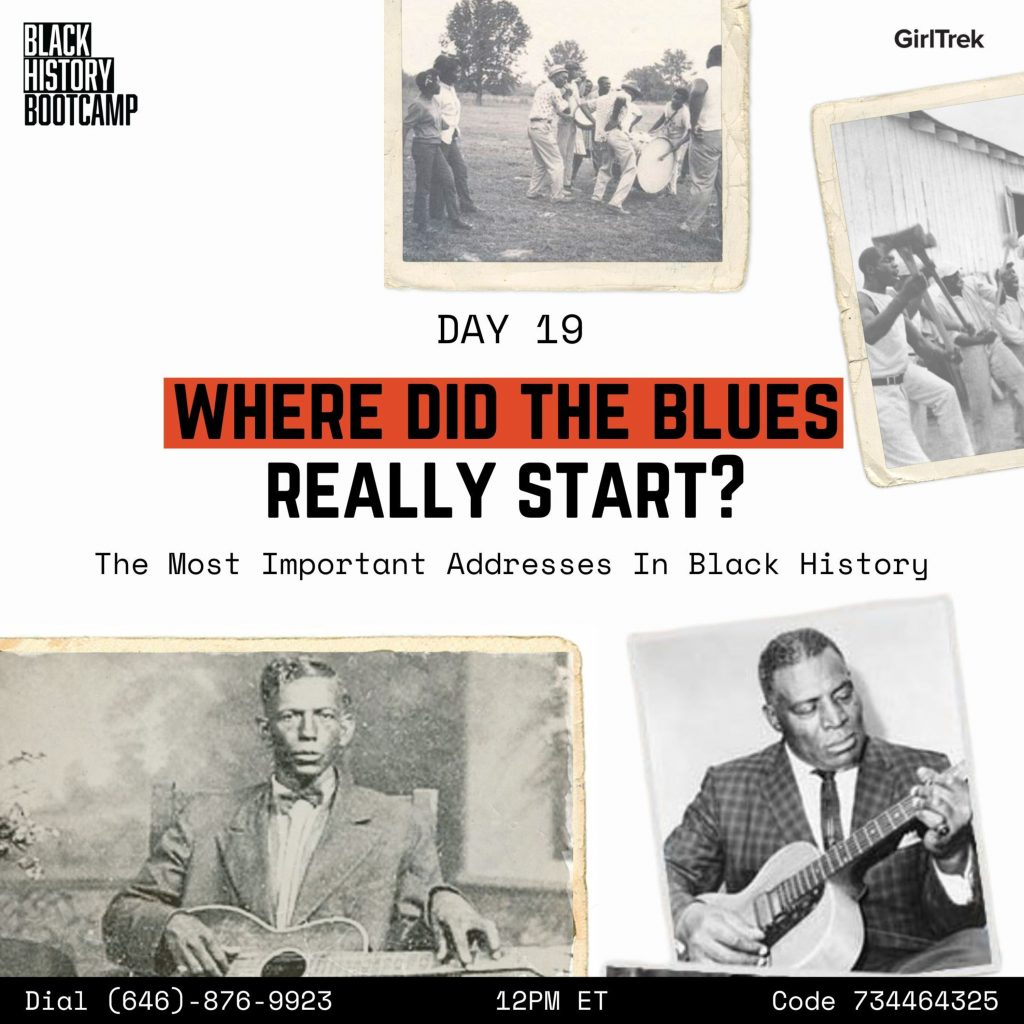 Day 19 “The first time I met the blues The Address: 229 Highway 8, Cleveland, Mississippi. The Story: It’s called Dockery Farms. “Farms” is a rebrand. It was a back-breaking plantation in a small town in Mississippi. It’s walking distance from where Fannie Lou Hamer picked cotton. It’s a stone’s throw from “the crossroads,” where […]

Black Neighborhoods | Day 18 |Have you heard about Congo Square in New Orleans? 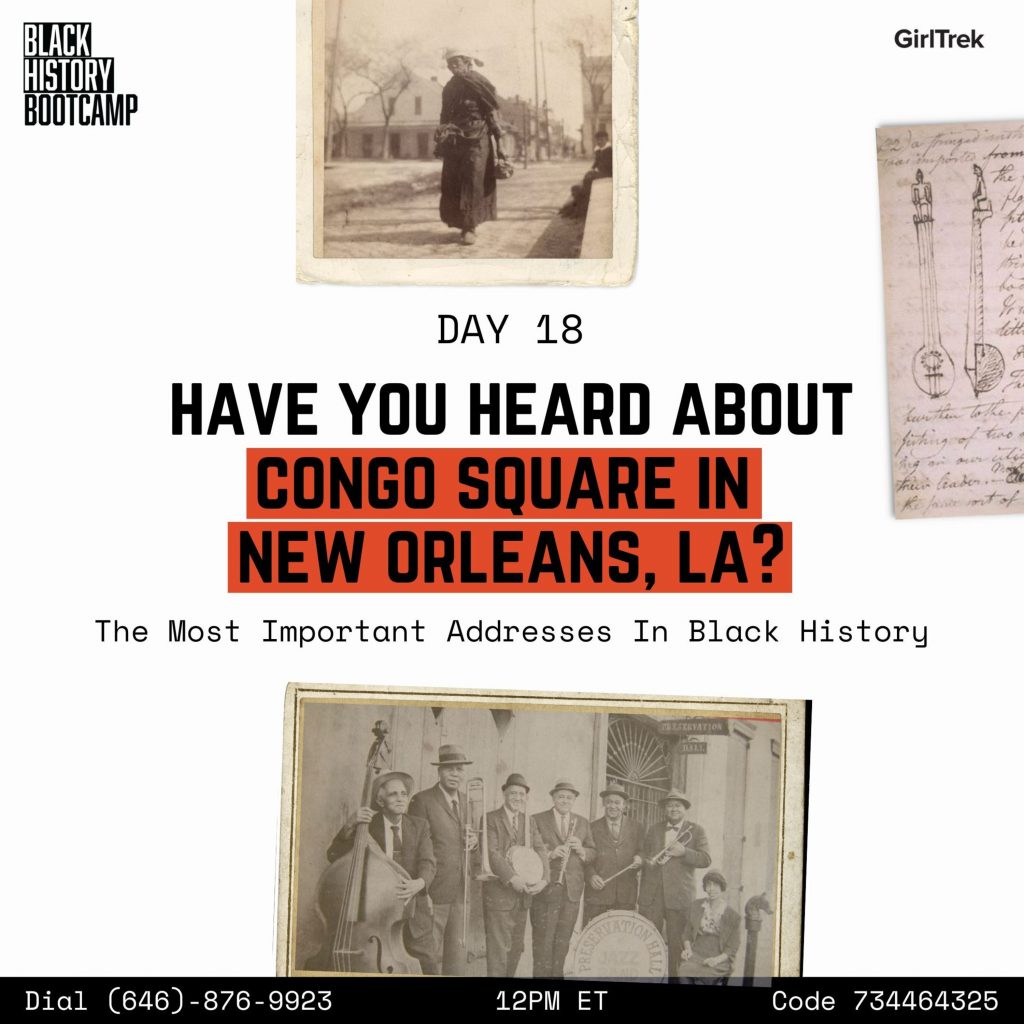 Black Neighborhoods | Day 17 | The Black History of The North Pole 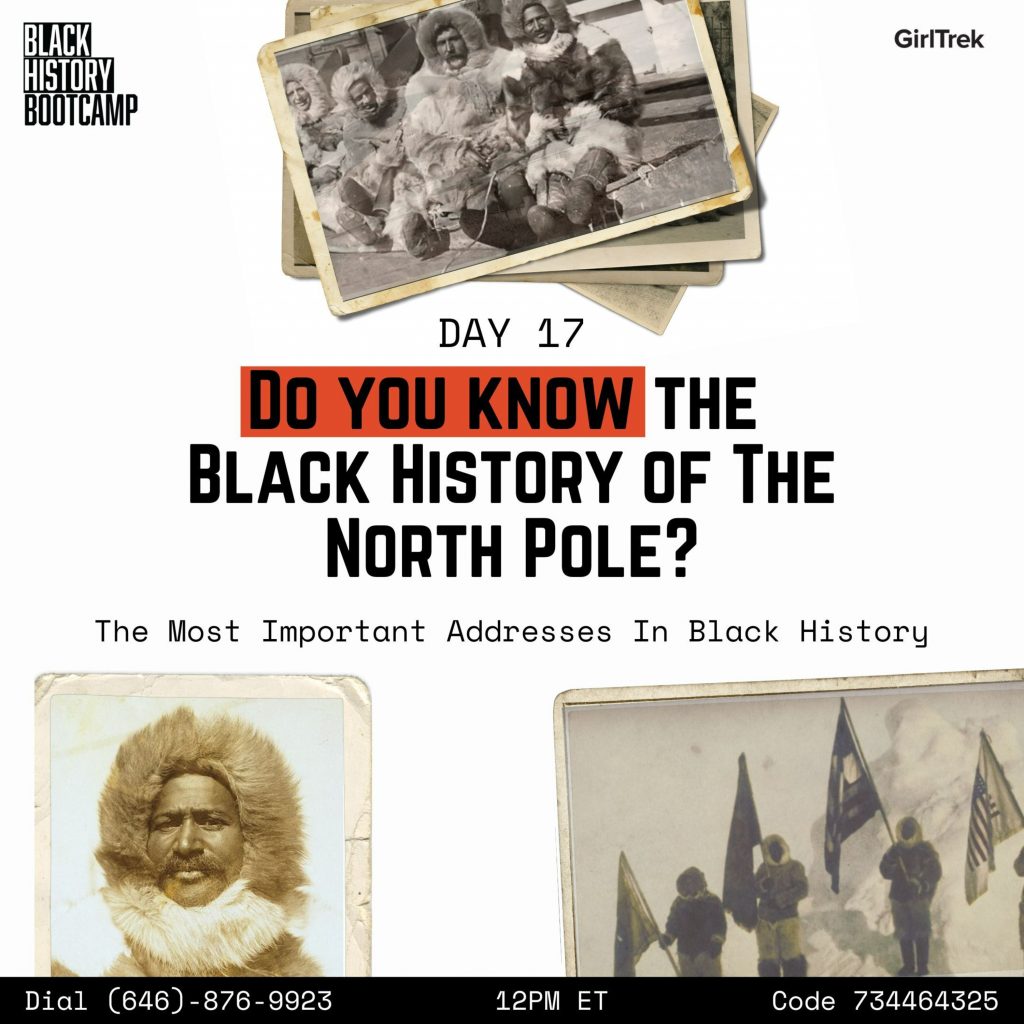 Day 17: Address: 90.0000° N, 135.0000° W The Story: A Black man was the first American adventurer to reach the North Pole!? Say what!? Call Patagonia, North Face, and Columbia Sportswear and tell them we’ve BEEN making their clothes look good! We don’t need a long story today. Facts are facts. So pull up. Because […]

Black Neighborhoods | Day 16 | Where is the bravest black church in America? 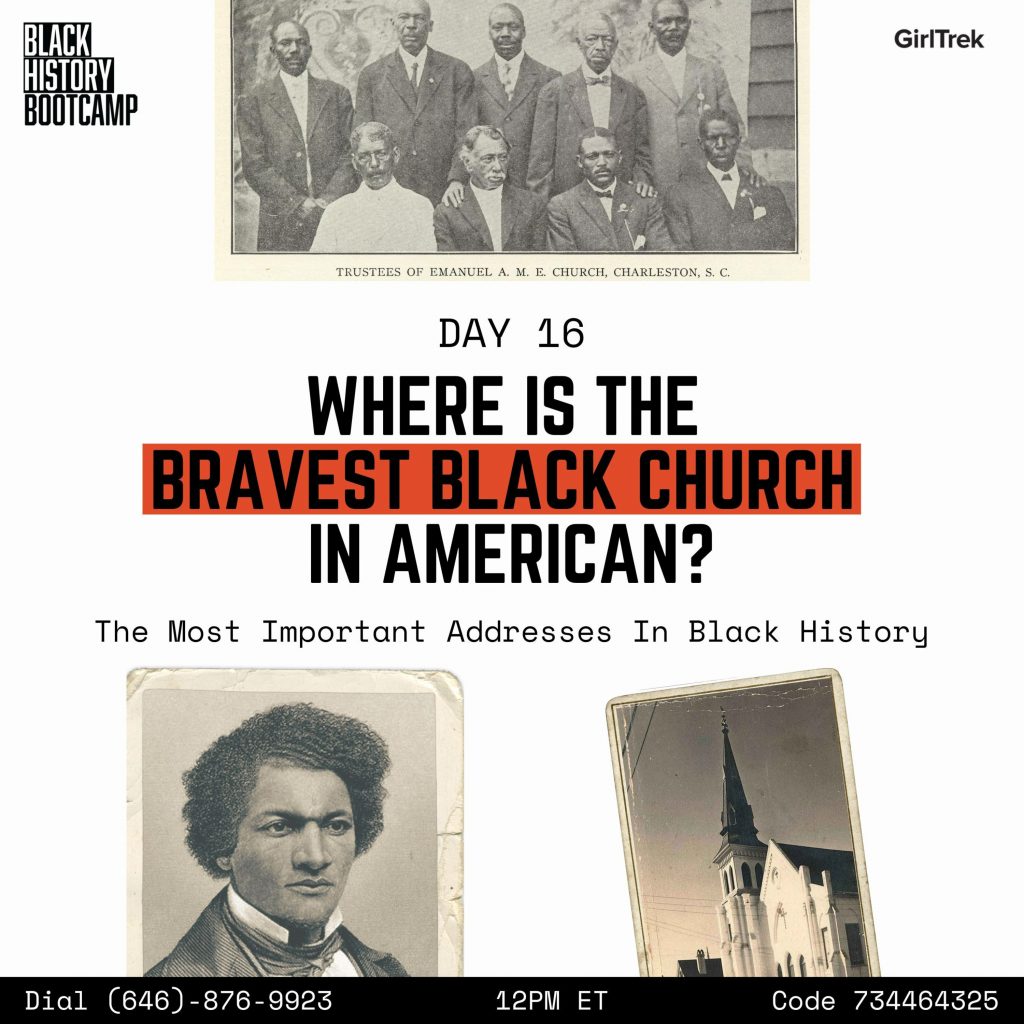 Day 16 The Address: 110 Calhoun Street, Charleston, South Carolina The Story: Mother Emanuel AME Church is one of the oldest Black churches in the United States, and for 200 years, it functioned as the center for organizing for civil rights. Its name says it all. Emanuel “God with us.” And God has been constant. […]

Black Neighborhoods | Day 15 | How Many Superstars were Made on This Detroit Street? 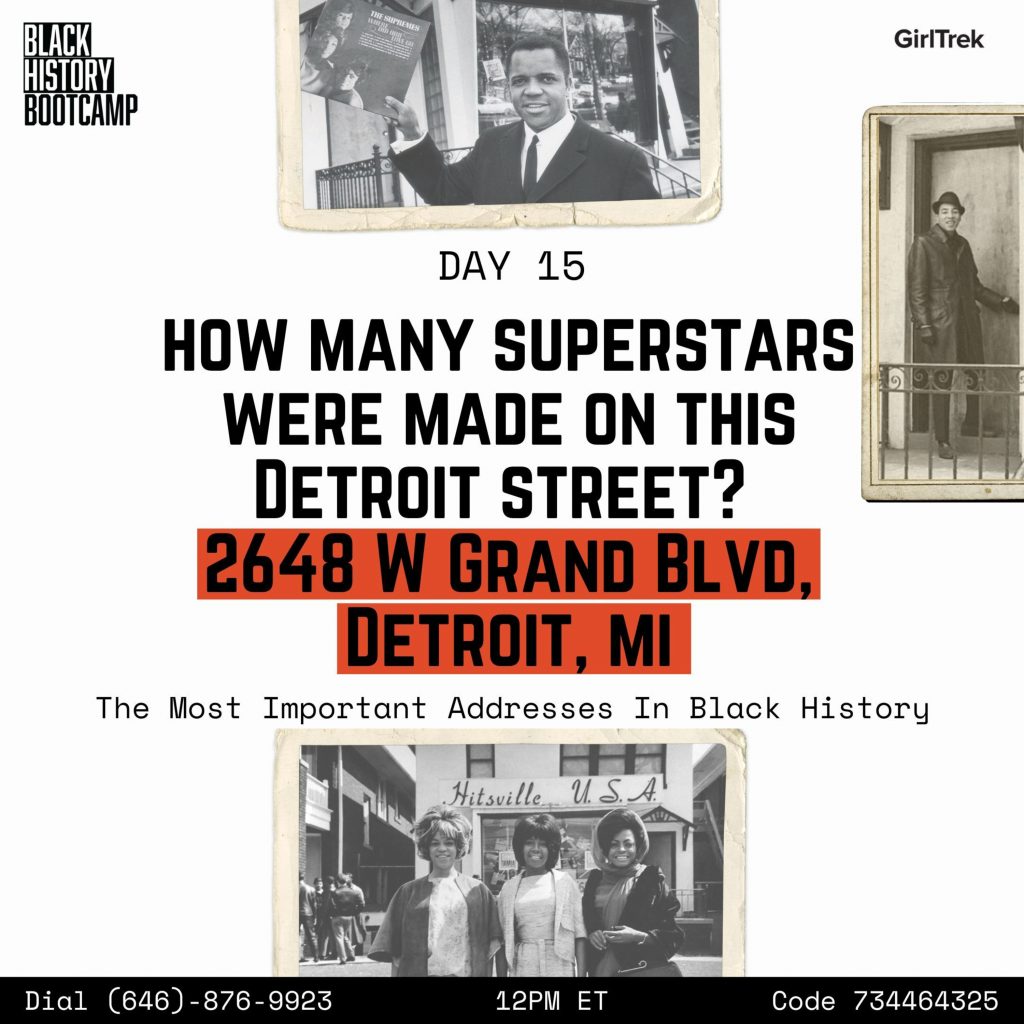 Day 15 The Address: 2648 W Grand Blvd, Detroit, Michigan, Hitsville,USA The Story: We dare you to try and make a top 10 Motown favorites list. We dare you. You’d have to narrow down Stevie Wonder’s entire catalog. You’d have to choose between solo Michael or The Jackson Five. You’d have to debate who was […] 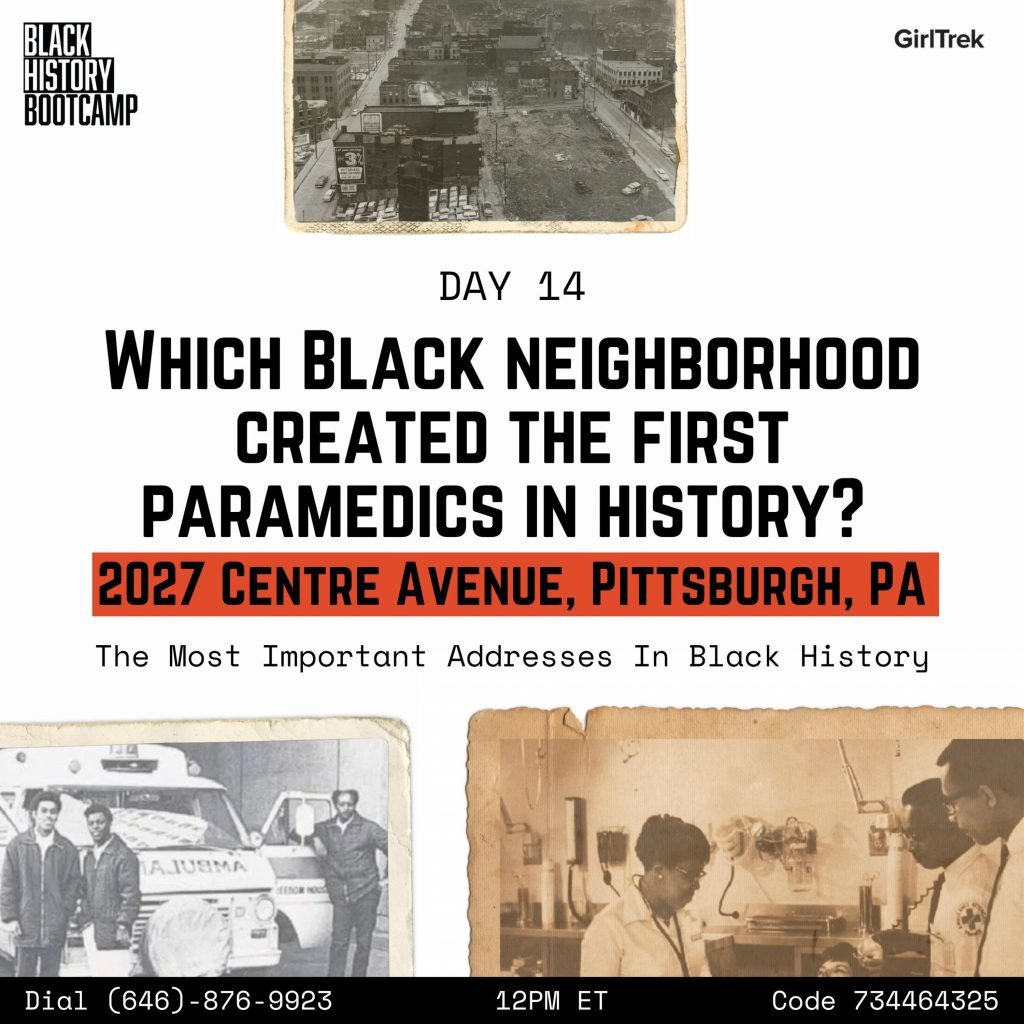 Day 14 The Address: 2027 Centre Avenue, Pittsburgh, PA The Story: The year is 1969. You and your girlfriends are walking down the street in the Hill District of Pittsburgh. It’s late. The house party is over. Your crew is laughing and darting through familiar streets to your sister’s house. Someone drives by blasting Aretha […] 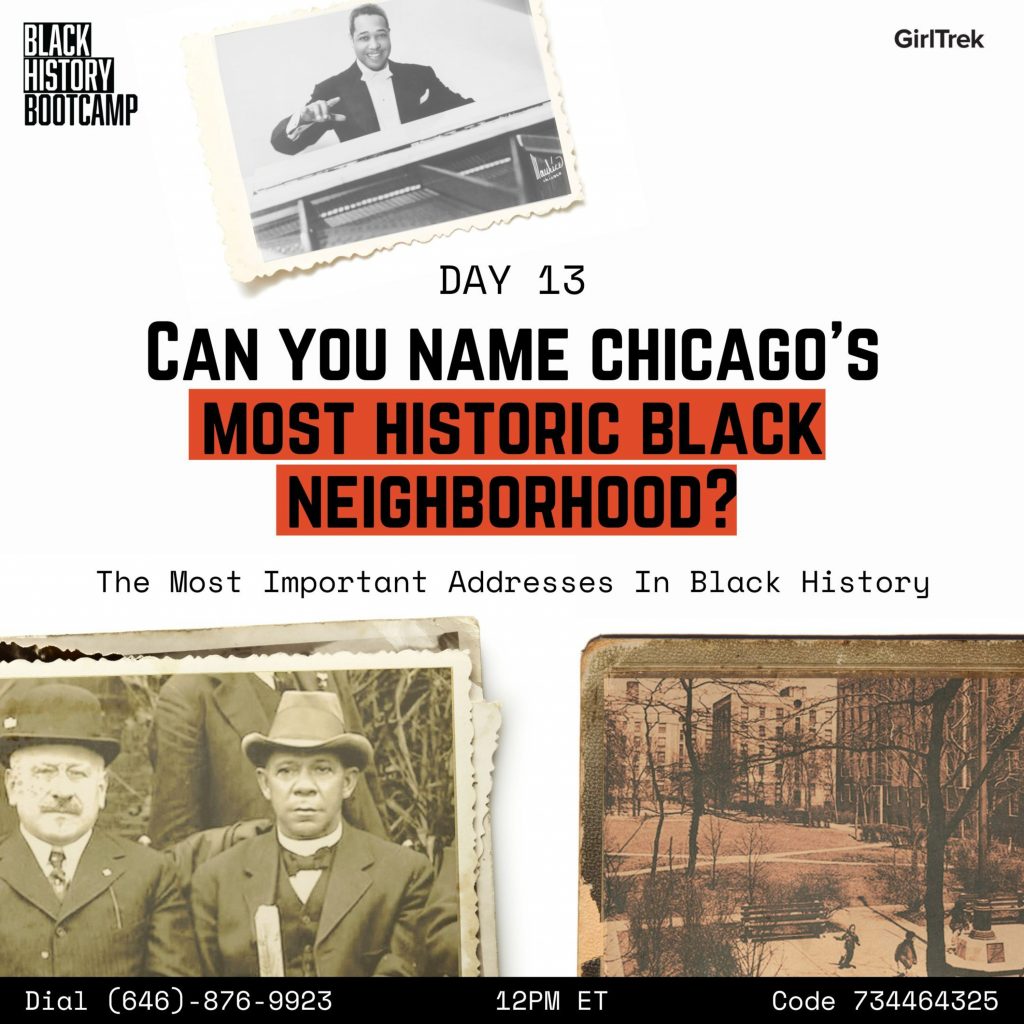 Black Neighborhoods | Day 12 | Where was the first Black school in the American South? 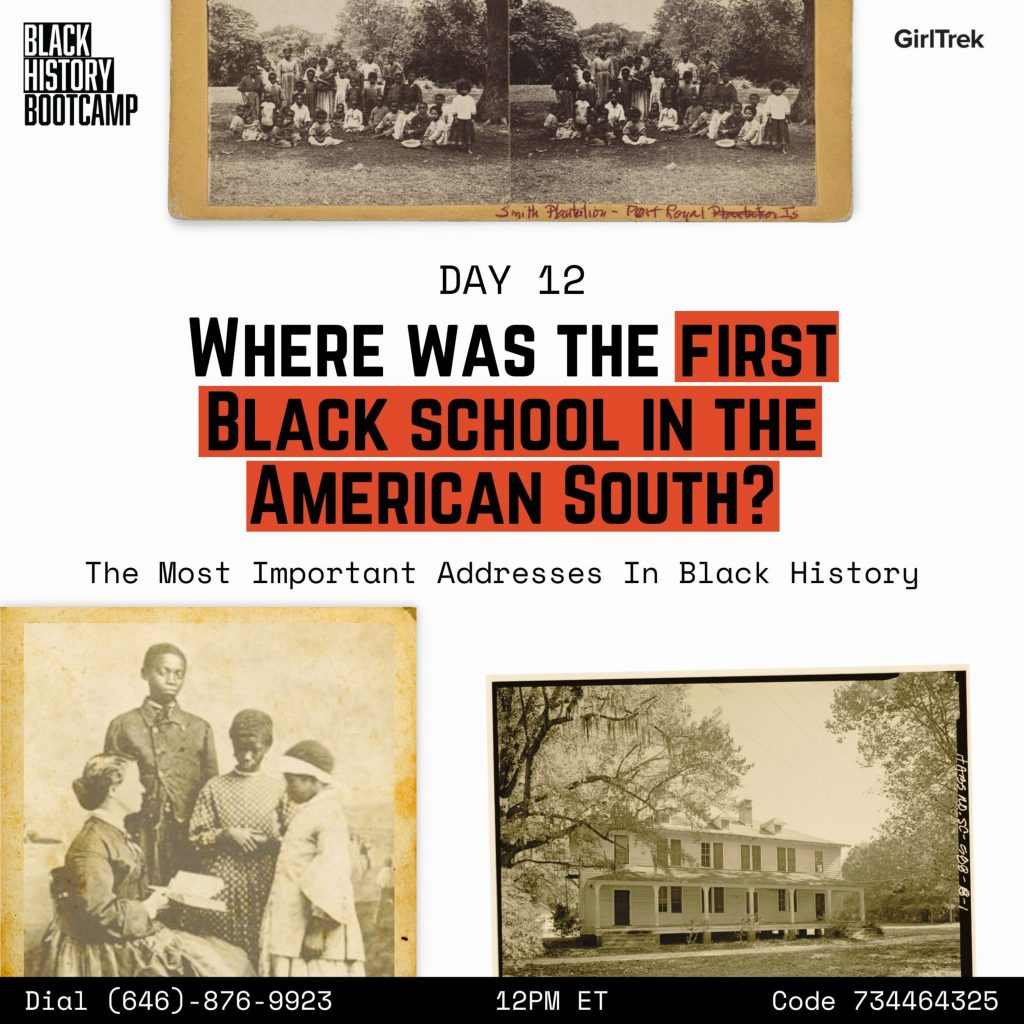 Day 12 The Address:16 Penn Circle, St Helena Island, SC 29920 The Story: At thismoment, it stands. The very first school established in America for freed African children… It was founded before the dust of the Civil War settled. … beneath the sway of Spanish moss on great oak trees, … on a 47-acre campus […]

Black Neighborhoods | Day 11 | Have you been to Sweet Auburn Ave? 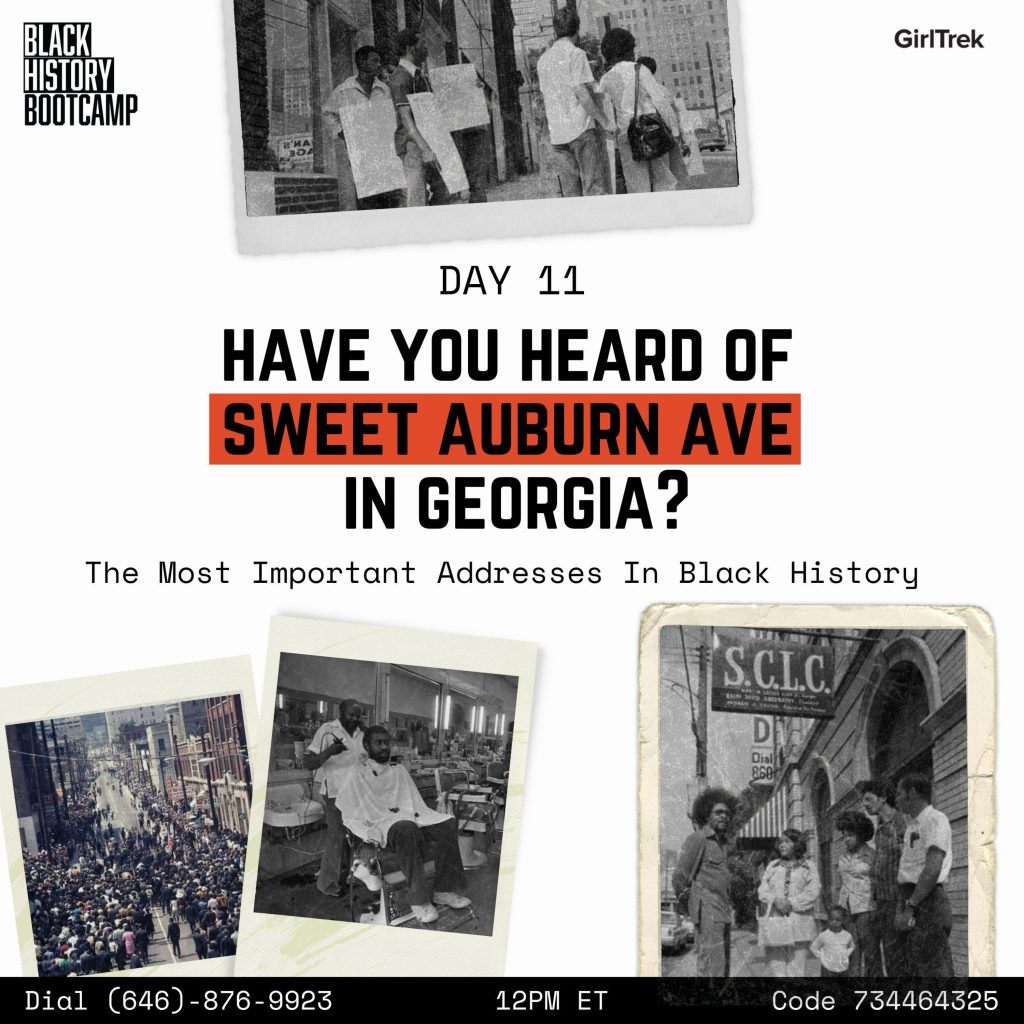 Day 11 Before T.I., before Jeezy, and before Lil Baby… For a city that thrives on “started from the bottom now I’m here” storylines, it makes sense that Atlanta’s first Black millionaire was a barber named Alonzo. He didn’t have a Morehouse degree, or an Alpha Phi Alpha pedigree like Sweet Auburn Avenue’s favorite son, […]

Black Neighborhoods | Day 10 | Where is the oldest Black town in the West? 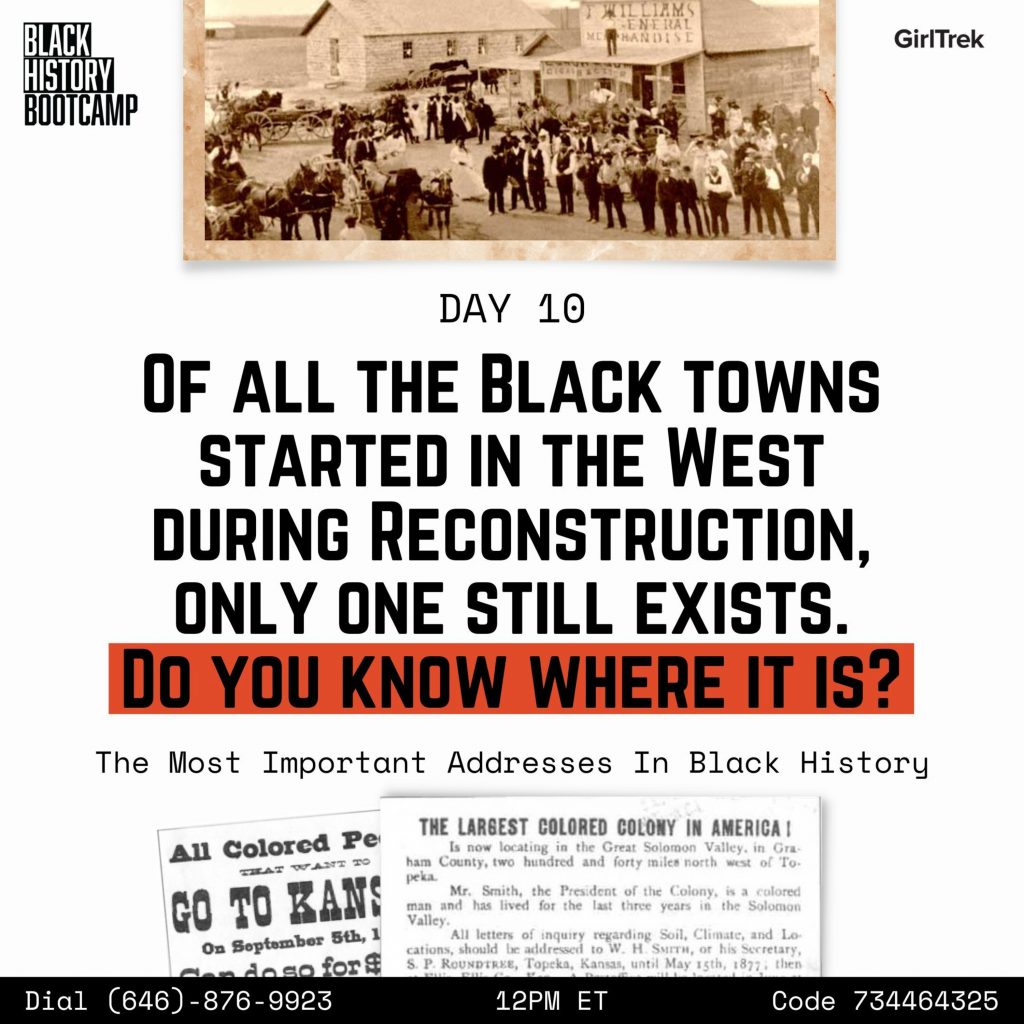 Day 10 Of all the Black towns started in the West during Reconstruction, only one still exists… Do you know where it is? Y’all I tried to Google it. … an address for you. But ain’t no addresses. It’s just… Nicodemus, Kansas 67625 NicoDEMus!!! I first saw the name in Washington, DC at the Smithsonian’s […]

Black Neighborhoods | Day 9 | Do you know who lived on Edgecombe Ave in Harlem, NY? 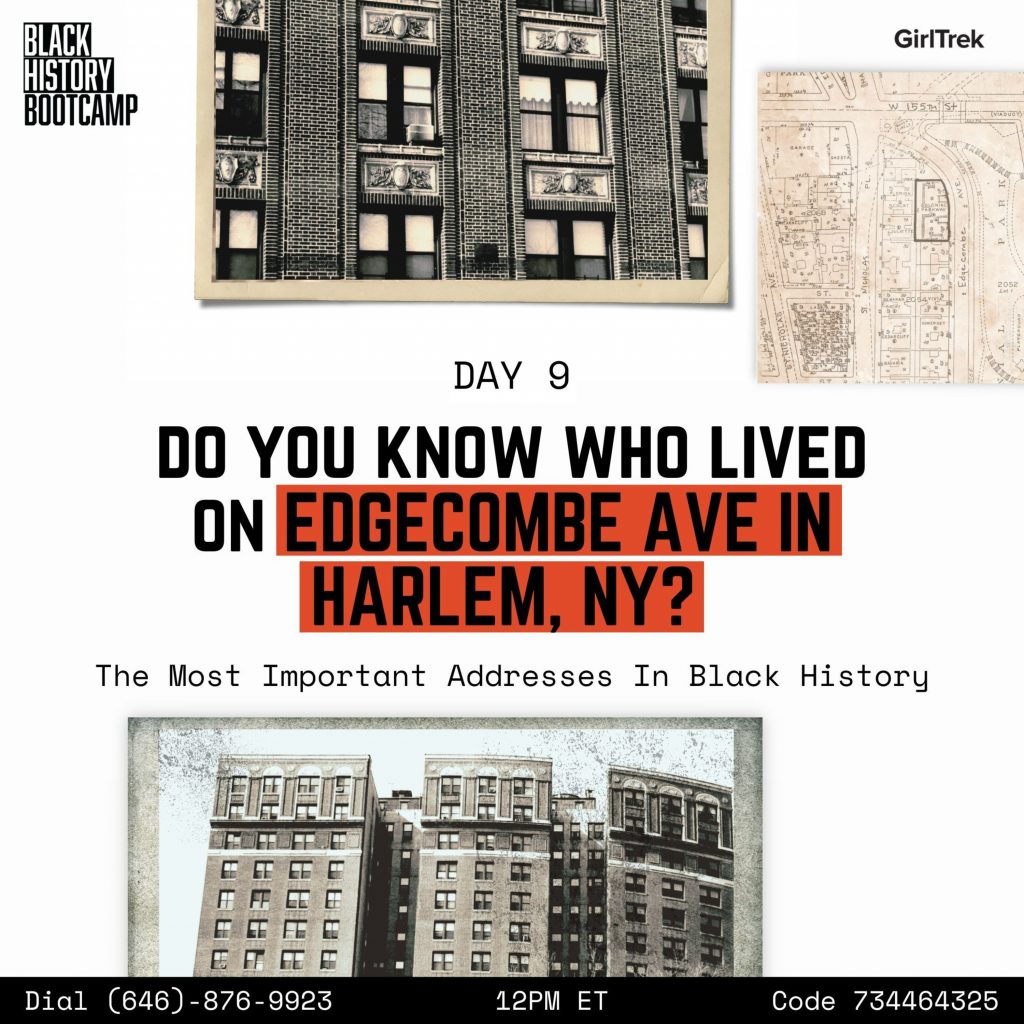 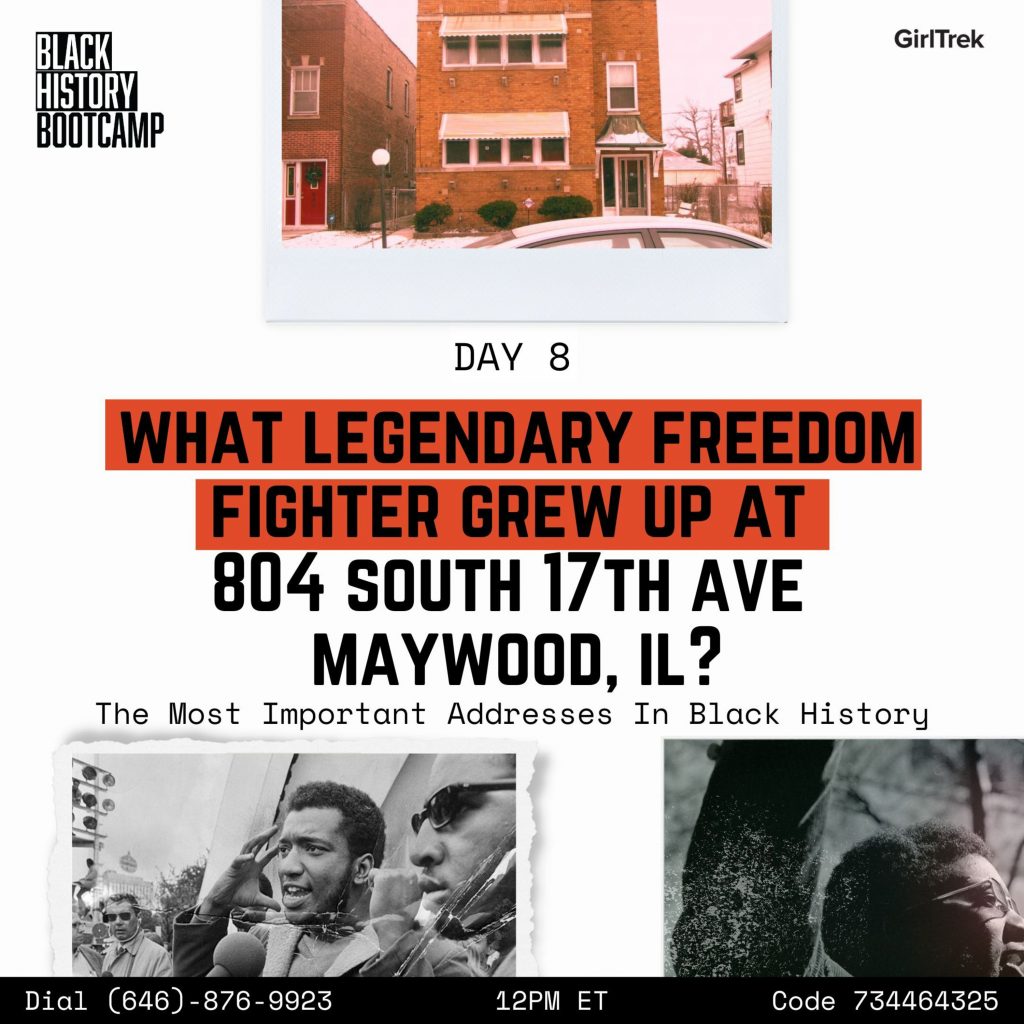 Day 8 “I am a revolutionary. I am a proletariat; I am the people.” – Fred Hampton The Address: 804 S.17th Ave, Maywood, IL 60153 The Story:He was the rising star. The youngest “Chairman” The greatest hope of The Black Panther Party. He was Tupac before Tupac. Young, charismatic, and powerfully Influential. His name was […] 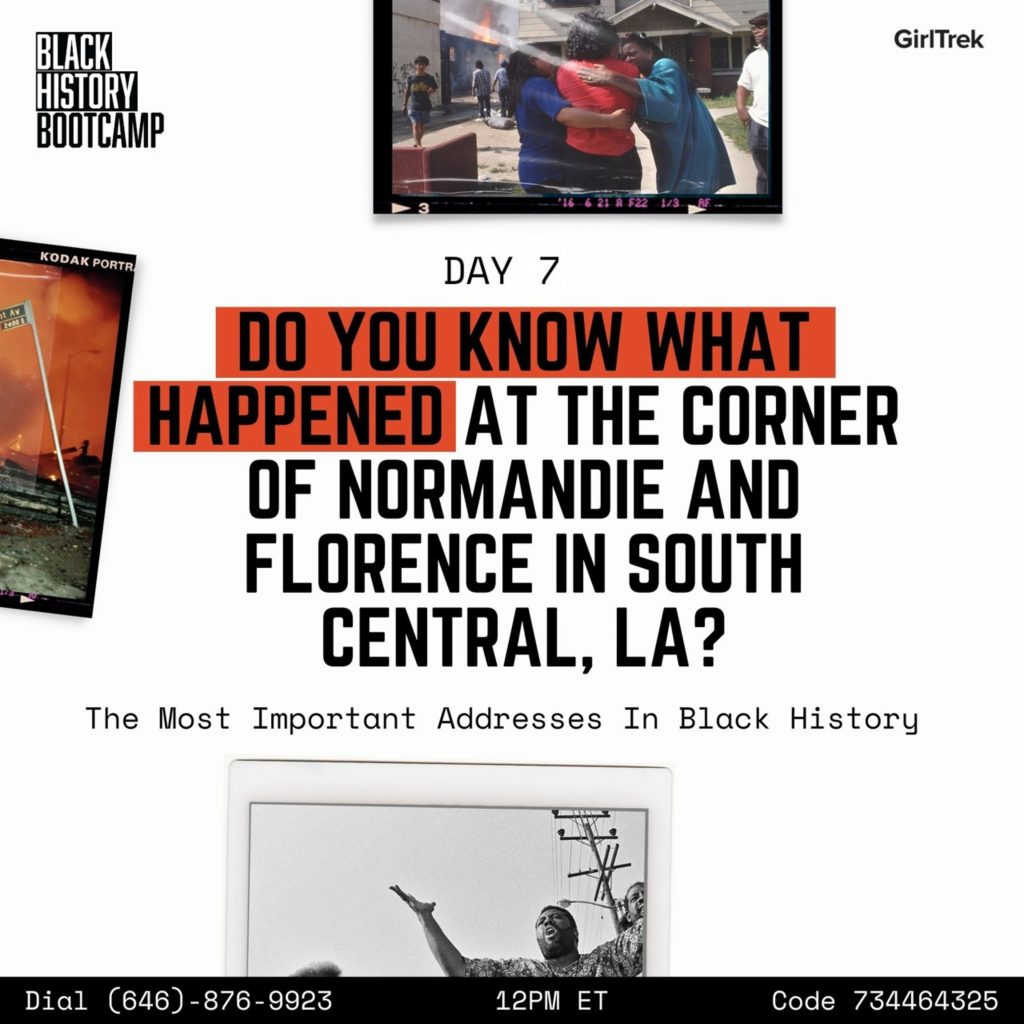 Day 7 The Address: The Corner of Normandie and Florence The Story:Some call it a riot, recalling when plumes of smoke filled the sky and an anarchist disorder took over the streets. Many others call it an uprising, pointing to the deep sense of injustice that had been left to boil over onto the streets […]

Black Neighborhoods | Day 6 | Azusa! Have you heard of that street? 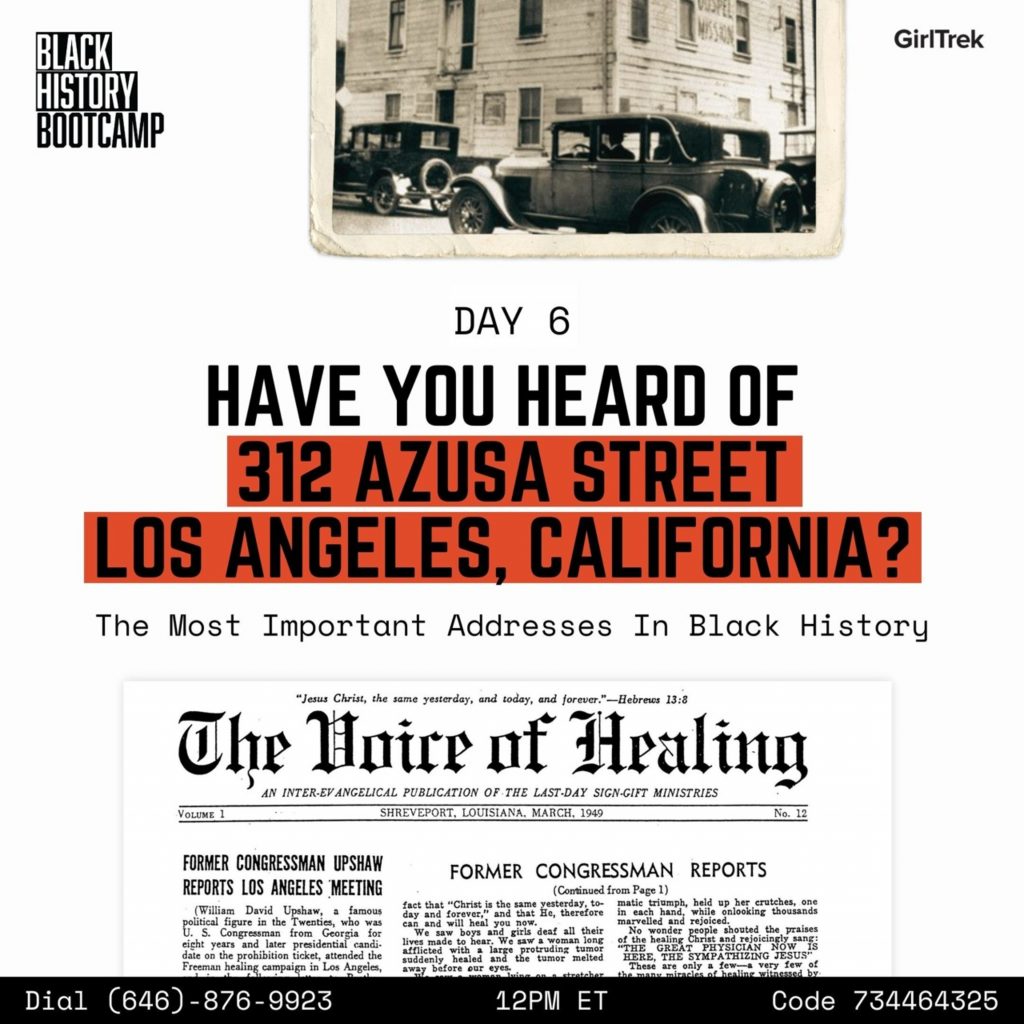 Day 6 The Address: 312 Azusa Street, Los Angeles, CA 90011 The Story:Have you ever heard someone speak in tongues? If you don’t know exactly what I mean, tune in today. If you know…you know. Goosebumps. This emoji 👀. The organists and choir stop. Vrrooop. God takes center stage. Skeptics look away. Believers take note. […] 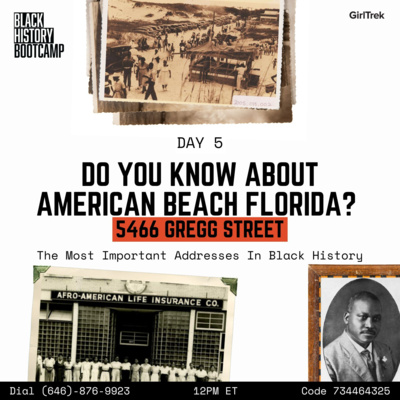 Day 5 “What does the Lord require of you but to do justice, and to love kindness, and to walk humbly with your God?” – Micah 6:8 The Address: 5466 Gregg Street The Story: This is not a story about high-falutin Black folks who earned enough money and privilege to vacation on exclusive fancy beaches. […]

Black Neighborhoods | Day 4 | Have you heard of Fannie’s Freedom Farm? 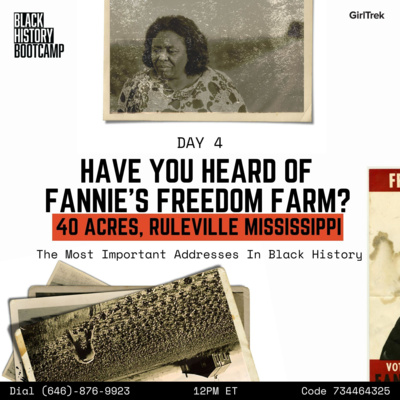 Day 4 “You can pray until you faint, but unless you get up and try to do something, God is not going to put it in your lap.” – Fannie Lou Hamer The Address: 40 Acres, Ruleville, Mississippi The Story: Raise your hand if you knew that Fannie Lou Hamer started a 600- Acre Farm […]

Black Neighborhoods | Day 3 | Have You Heard of AfricaTown? 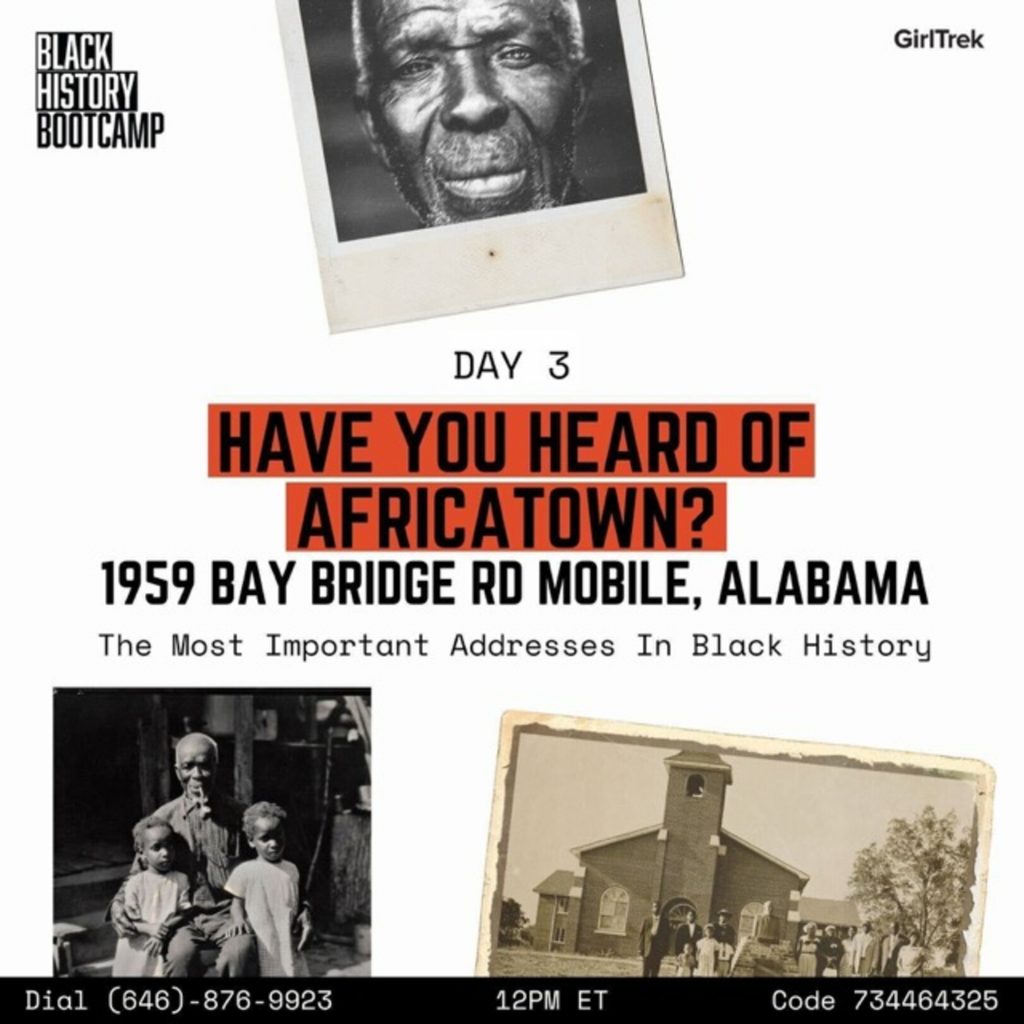 Day 3: Africatown The Address: 1959 Bay Bridge Rd, Mobile, Alabama The Story: This story has it all. Dahomey warriors, a landmark legal case, the last known survivor of the Atlantic slave trade, a brief appearance by Zora Neale Hurston, a re-discovered shipwreck, and a resilient community that, despite struggling with environmental racism for most […] 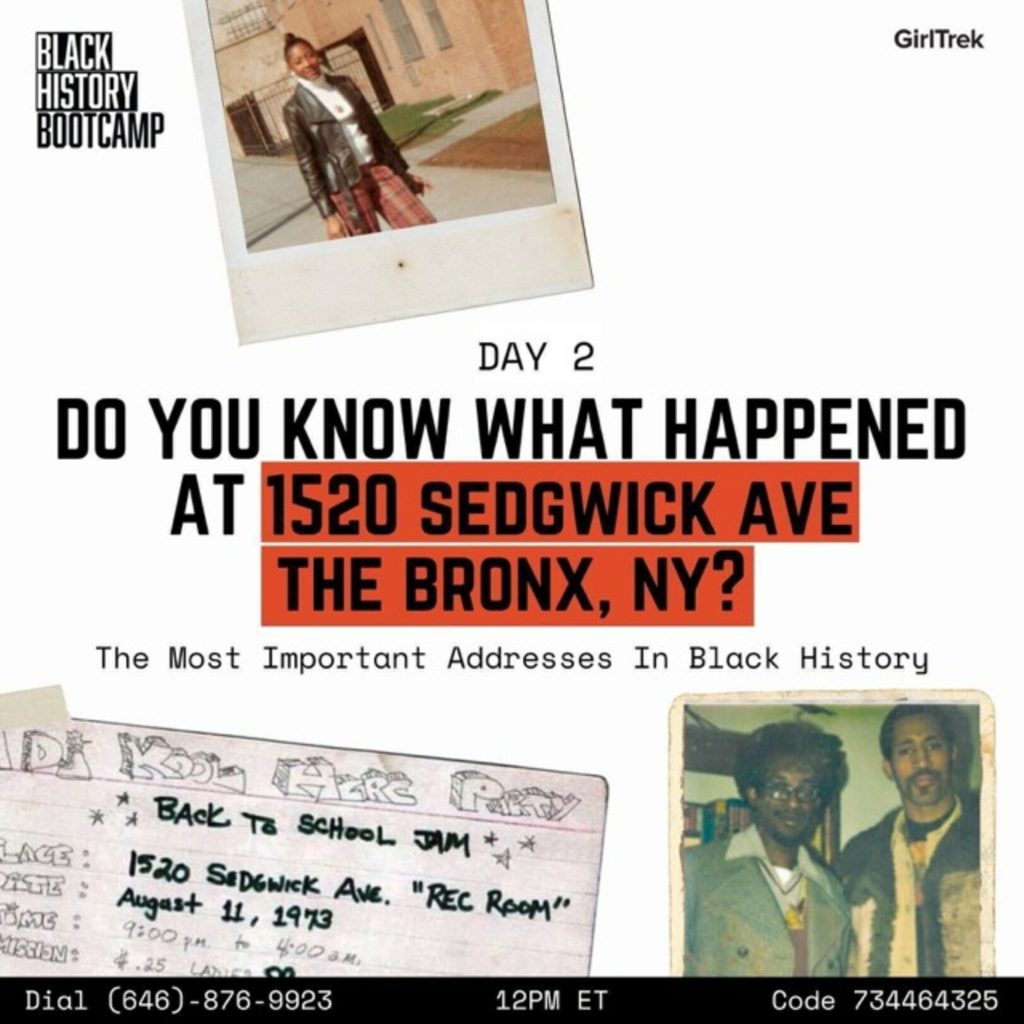 Day 2 “I’m kicking new flava in ya ear!” – Craig Mack The Address: Do you know what happened at 1520 Sedgwick Avenue in The Bronx, New York? The Story: Somebody’s uncle, with a good government job, signed the purchase order to put electrical outlets in light posts in Black neighborhoods across America. He’s a […] 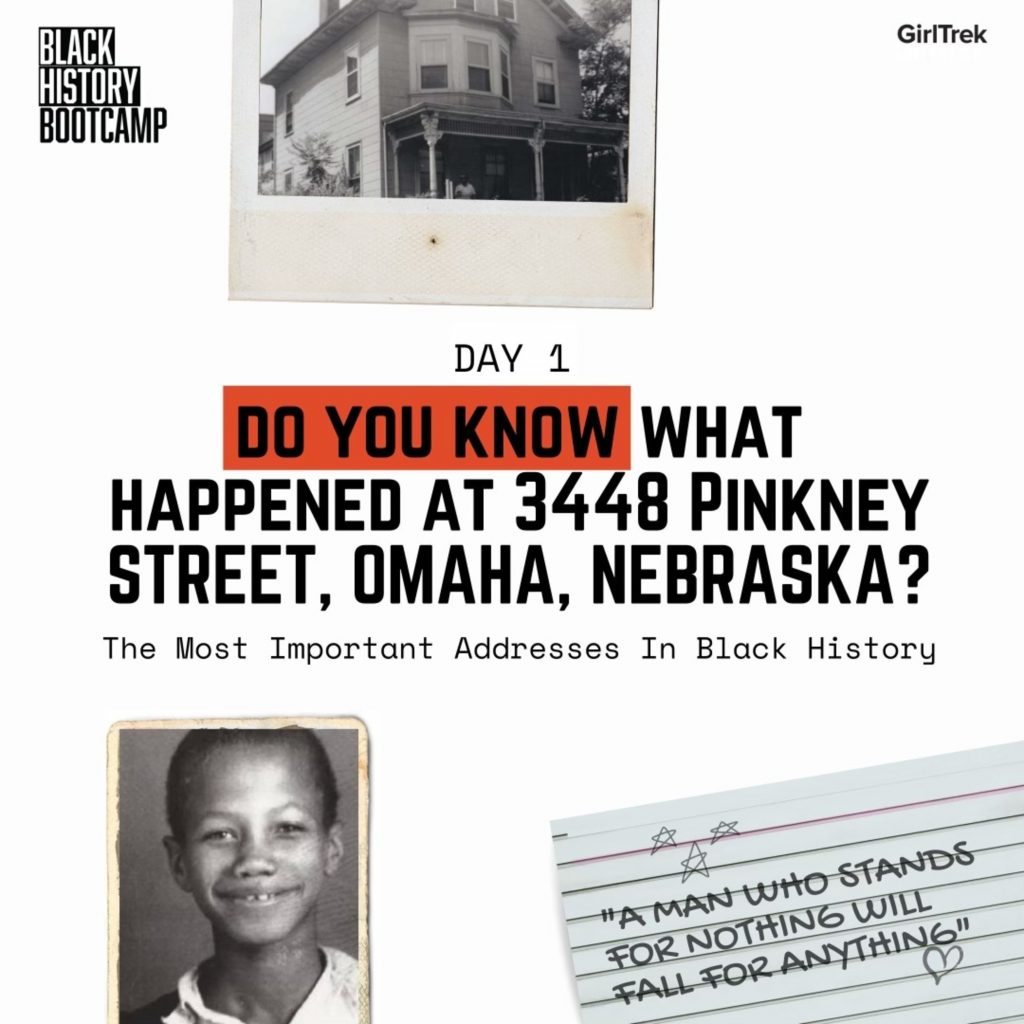 Day 1 “A man who stands for nothing will fall for anything.” – Malcolm X The Address:3448 PINKNEY STREET OMAHA, NEBRASKA The Story: The historical marker is behind the building. You cannot see it from the parking lot. Near the historical marker lies a small structure that is supposed to resemble the original house. The […] 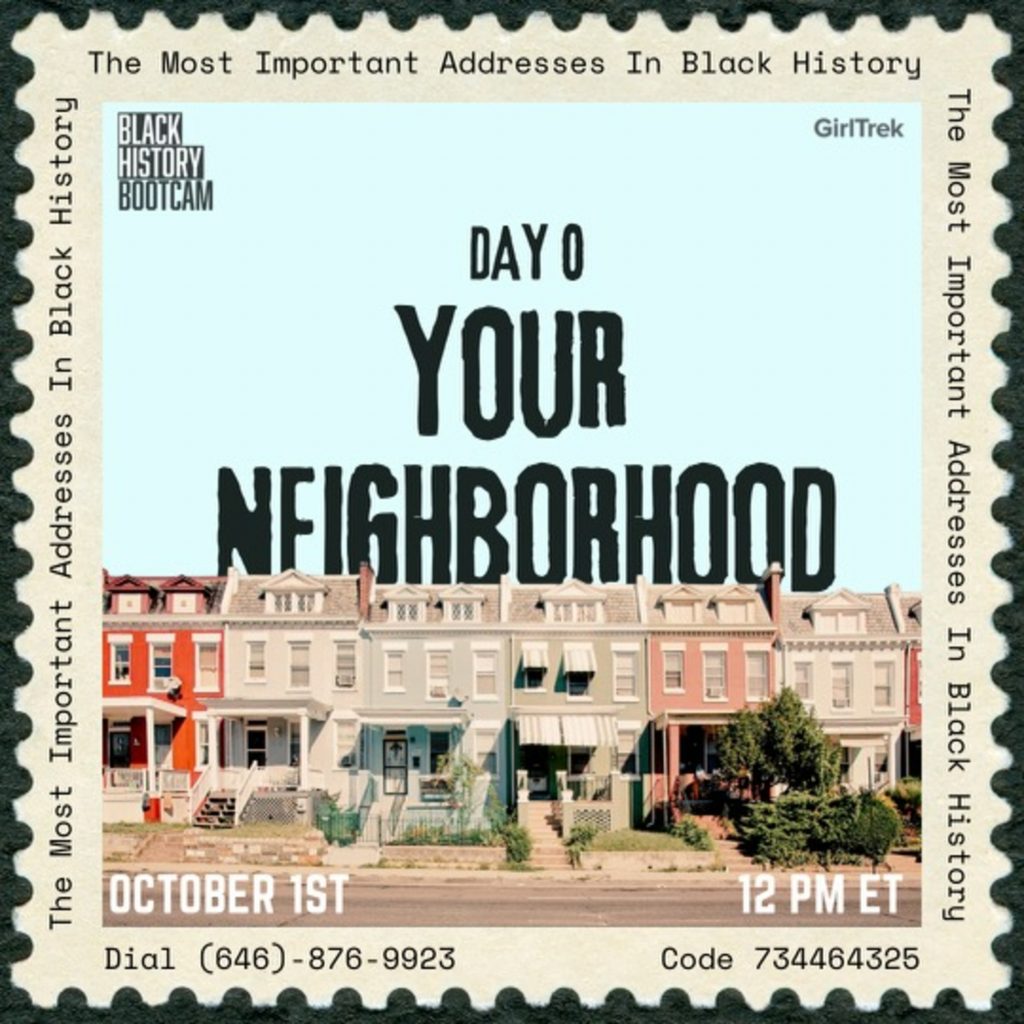