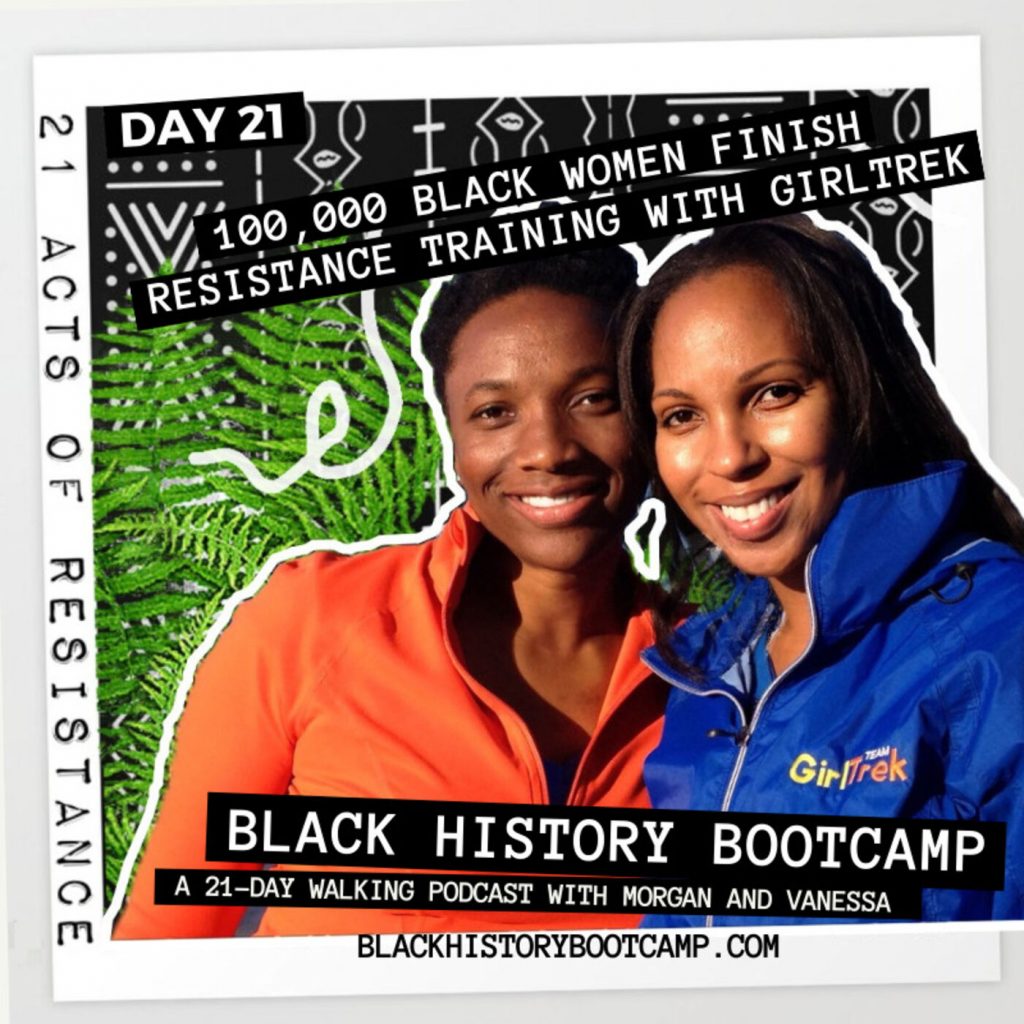 Something powerful. Energetic. A seismic shift in consciousness. While the world unraveled around us, we walked and trained like an army. Studying the 21 most powerful acts of Black resistance. And in that discipline, something was fortified inside each and every one of us. In the words the great Chadwick Boseman, who transitioned to be […] 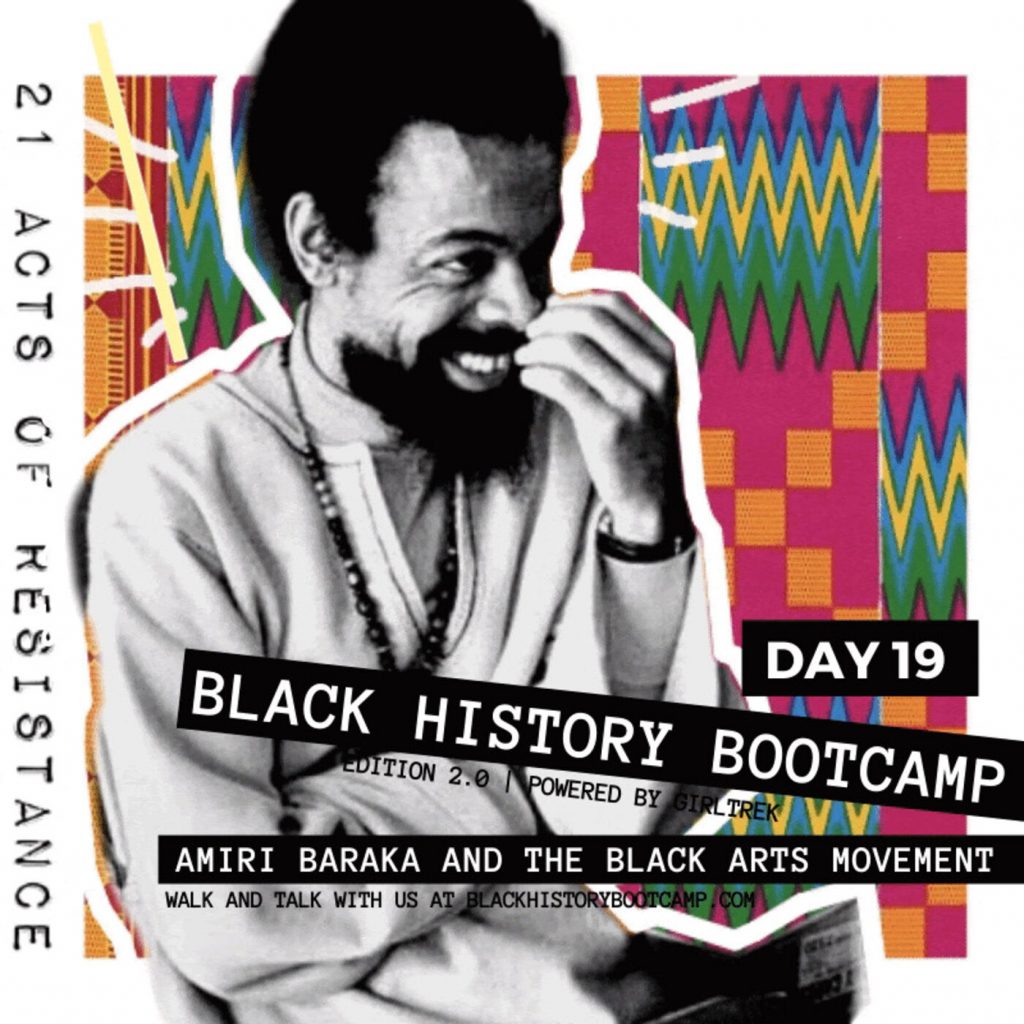 The artist’s role is to raise the consciousness of the people. To make them understand life, the world and themselves more completely. That’s how I see it. Otherwise, I don’t know why you do it. – Amiri Baraka One month after Malcolm X’s assassination in February 1965, the highly respected writer LeRoi Jones, who would […]

“Oh Captain, My Captain.” Remember The Dead Poets Society? The movie with Robin Williams? He took his students into the hallway to study vintage photos of long-gone students. “Can you hear them talking to you?”, he asked. “If you lean in real close, and listen, you can hear them whisper their legacy to you. Seize […] 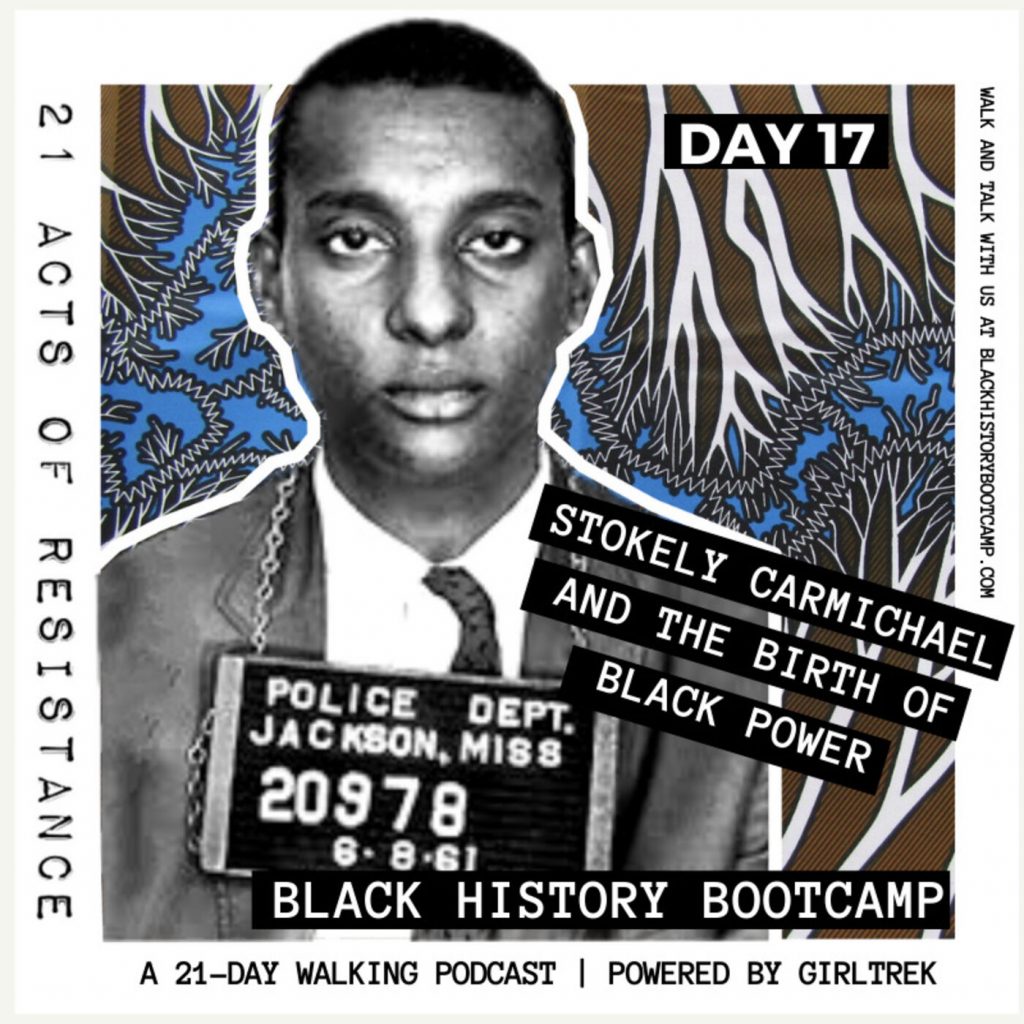 Walking has always been used as a tool for social change. In early June of 1966 James Meredith, who had become the first Black man to attend the University of Mississippi, set out to walk from Memphis, Tennessee, to Jackson, Mississippi, a distance of more than 200 miles, to promote Black voter registration and protest […] 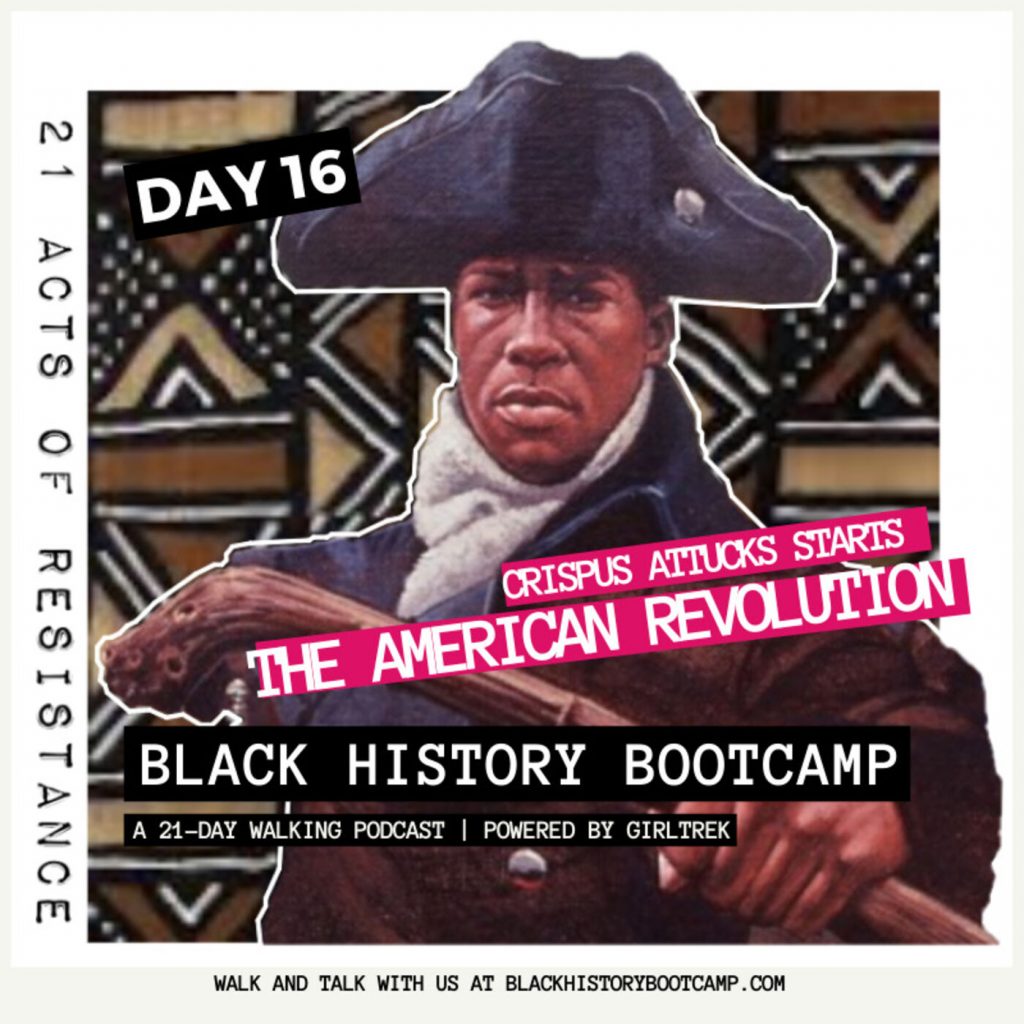 …one little sentence tells us all we need to know about this man. In a letter, his sister said this…”If they had not killed Cris, Cris would have killed them.” Don’t you ever get it twisted. Crispus Attucks started The American Revolution. And today’s conversation is about his murder. This convo could not be more […] 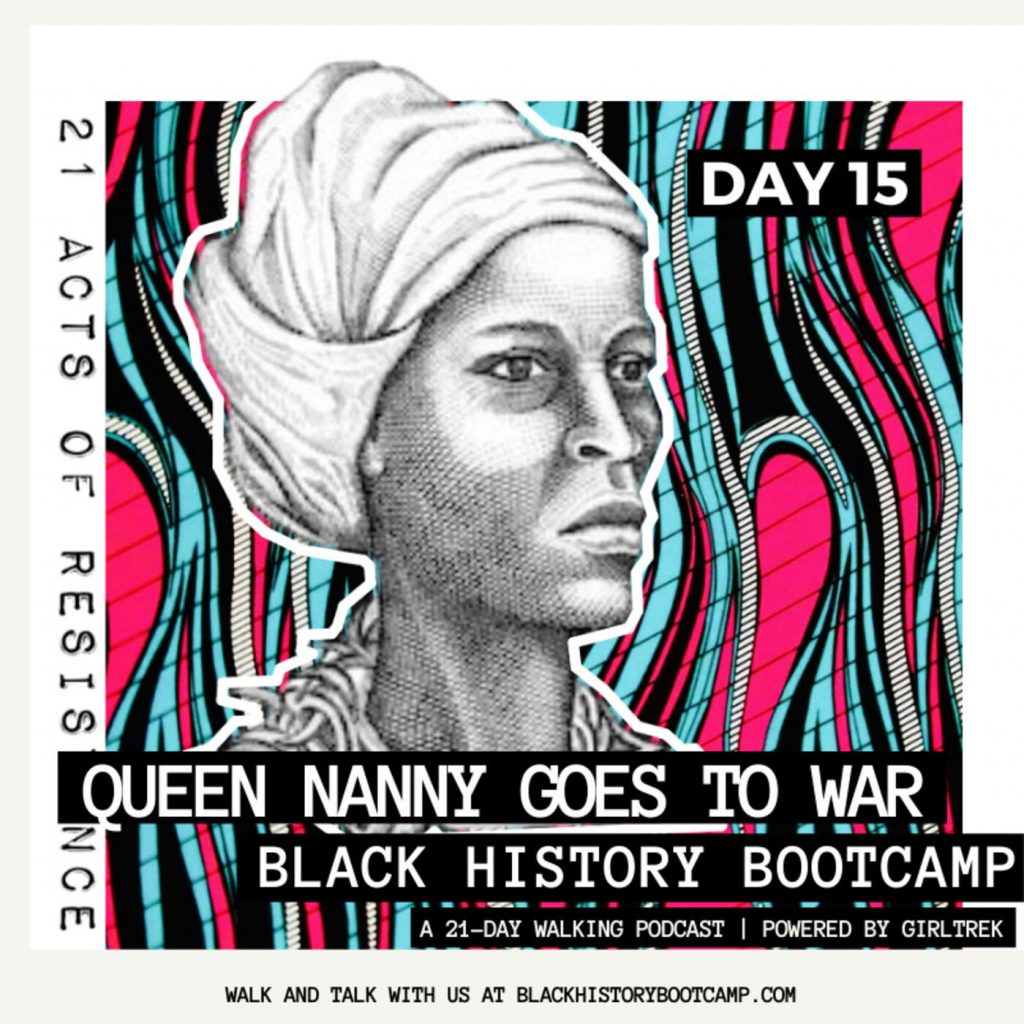 Today’s walk is dedicated to a political organizer, military strategist, and master of guerrilla warfare, the one and only Queen Nanny of Jamaica. A woman who guided her people through an intense period of fighting against the British. From Queen Nanny, we learn the art of resistance. Get ready to take notes. Queen Nanny was […] 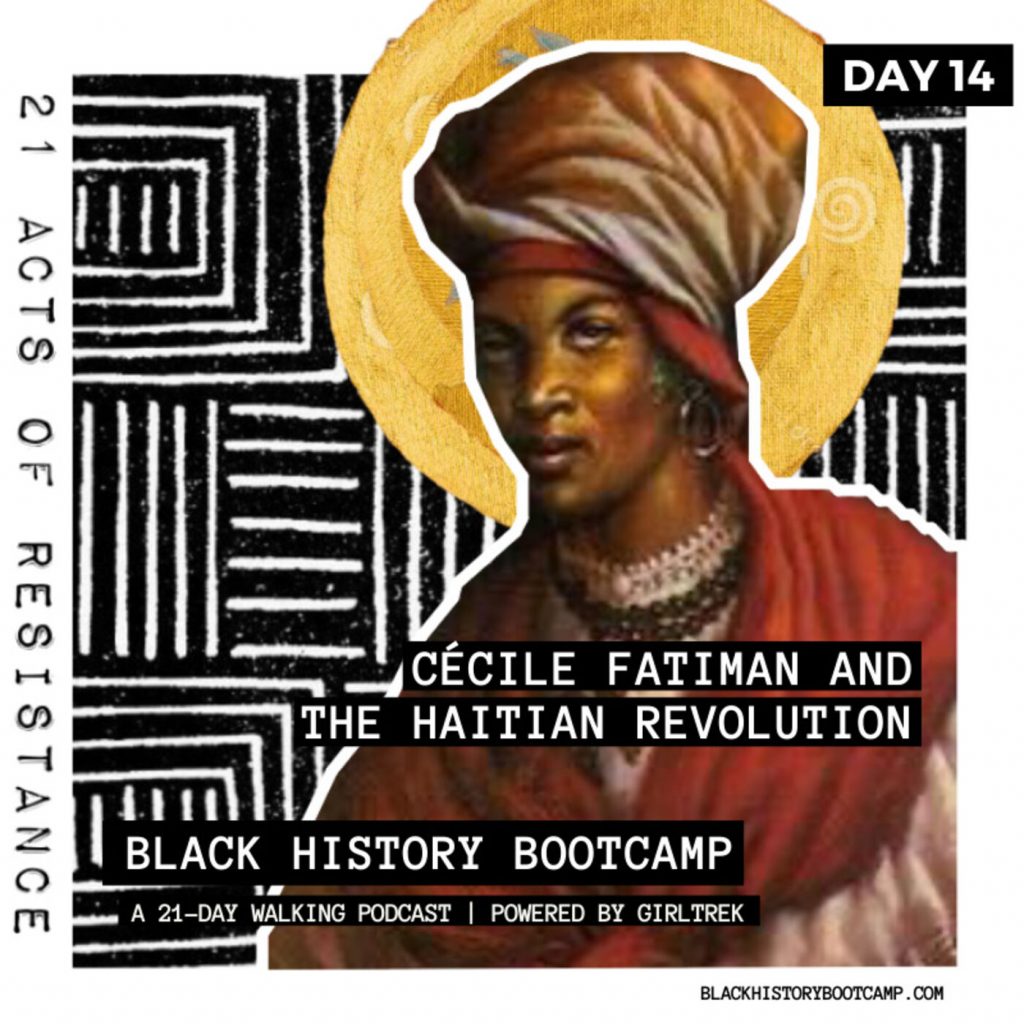 We are the #daughtersof Cécile Fatiman a Haitian Voodoo Priestess who literally conjured a revolution. Her warrior blood runs through our veins. Our grandmothers and great-grandmothers – themselves root-workers and prayer warriors – were women who learned the art of spiritual warfare from women like Cécile. That’s why we are so excited to introduce her […] 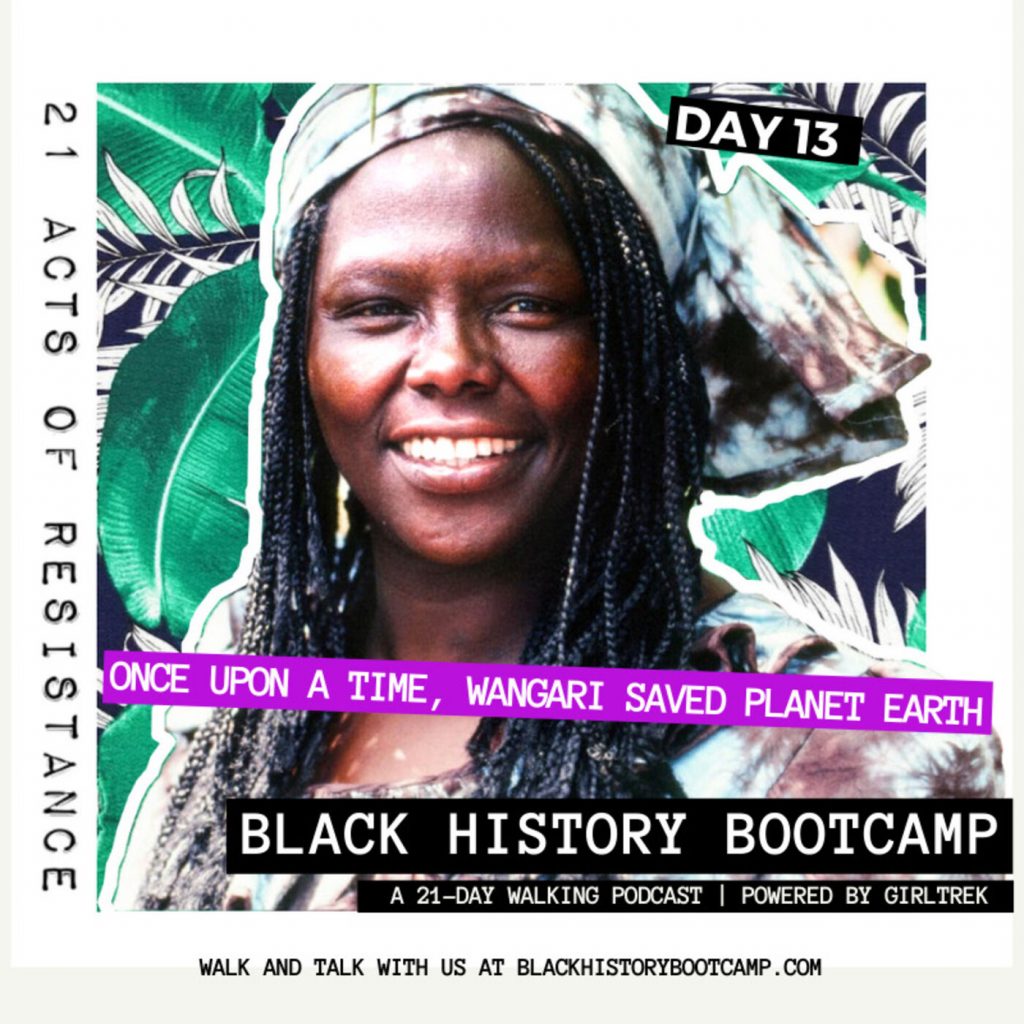 Once upon a time, Wangari Maathai saved Planet Earth. When people say they want to “diversify” the environmental movement, I cough on the arrogance. Black women, indigenous women, and women of color around the globe are saving the planet. Like, right now. Like this actual second. Planting, cultivating, harvesting, carrying, selling, cooking, composting, turning over […] 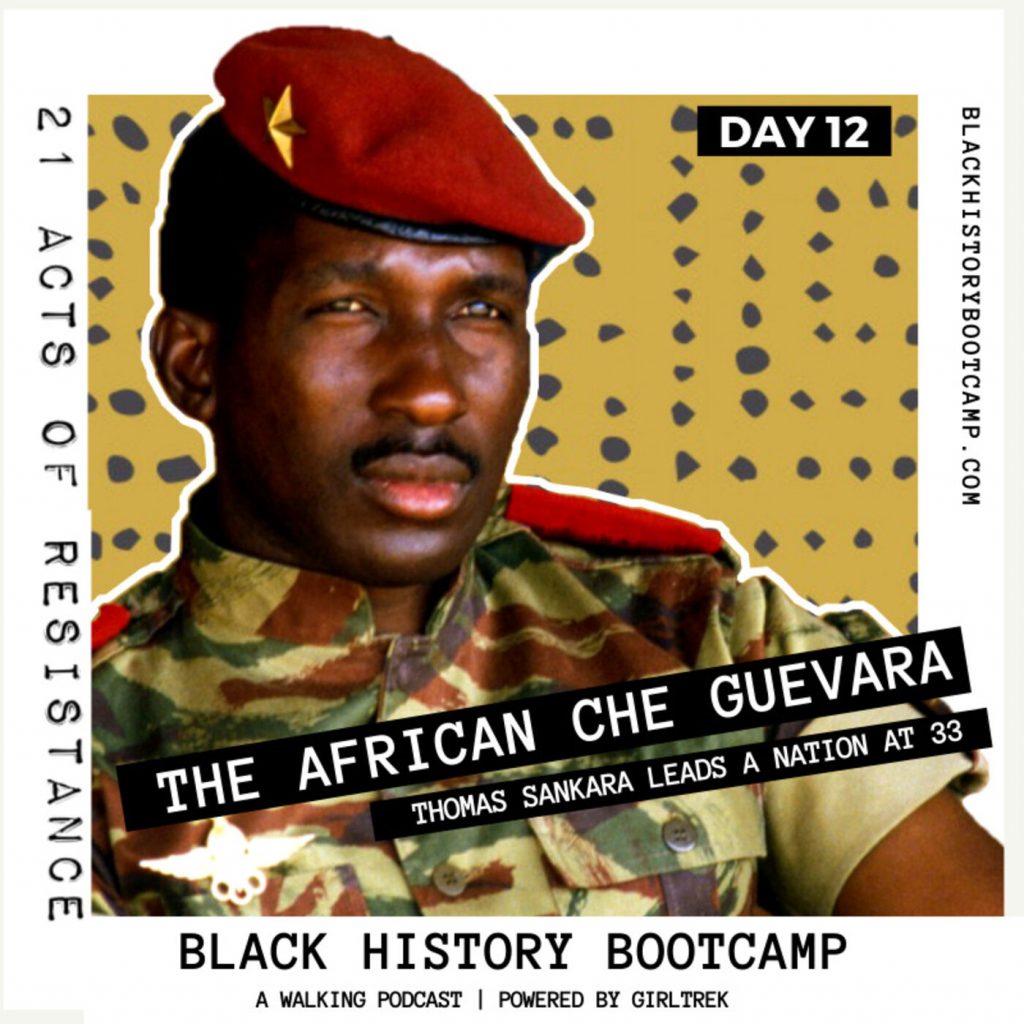 They killed him. The official death report said natural causes but in a recent exhumation, his young body was riddled with bullet holes. Thomas Sankara was a folk hero. He championed the people over the powerful. He encouraged newspapers to tell the truth and – in an act of solidarity during his presidency – sold […] 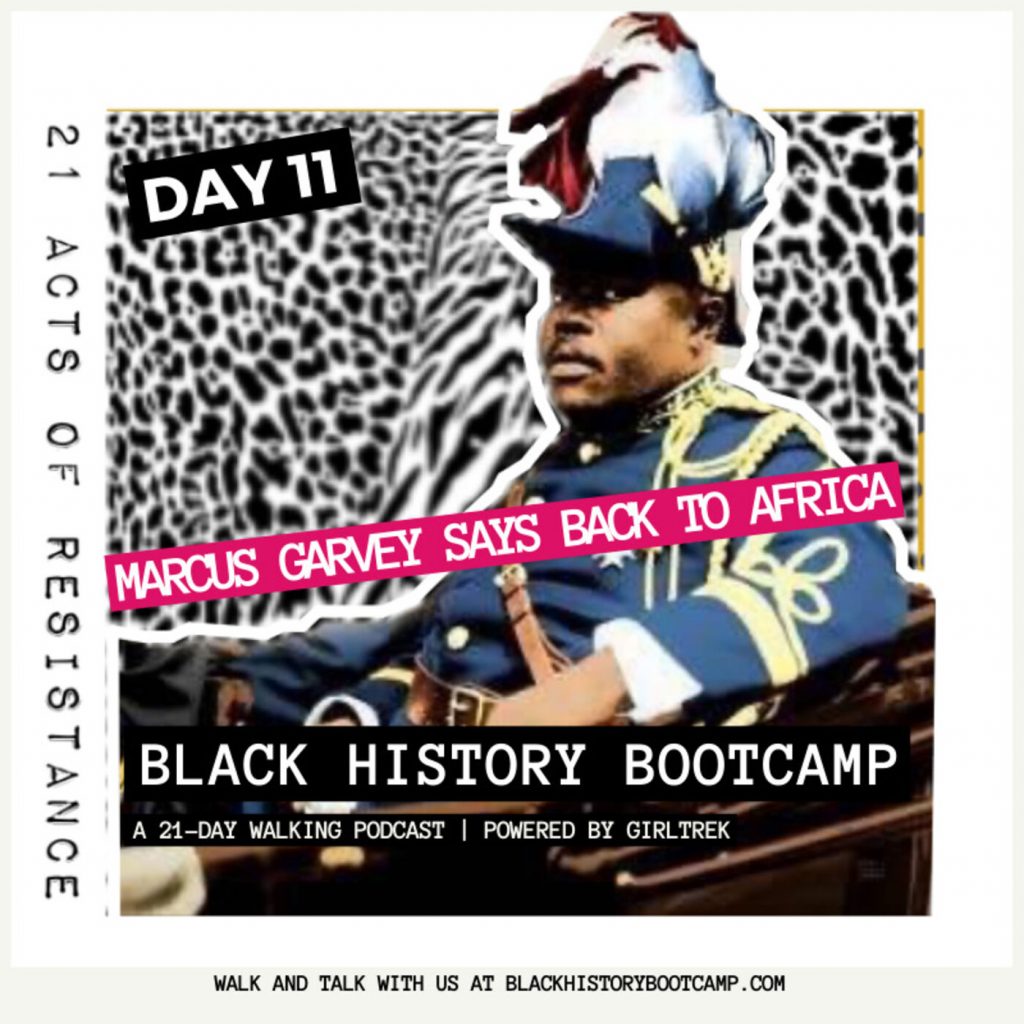 “Go back to Africa” They meant it as an insult. He meant it as a rallying cry. Today’s walk and history lesson is dedicated to the Honorable Marcus Mosiah Garvey. Some might call him the original African giant. Black, proud, and preaching the gospel of self-determination, Marcus Garvey hailed from St. Ann’s Bay Jamaica. The […]

Resistance | Day 10 | The Most Dangerous Negro in America 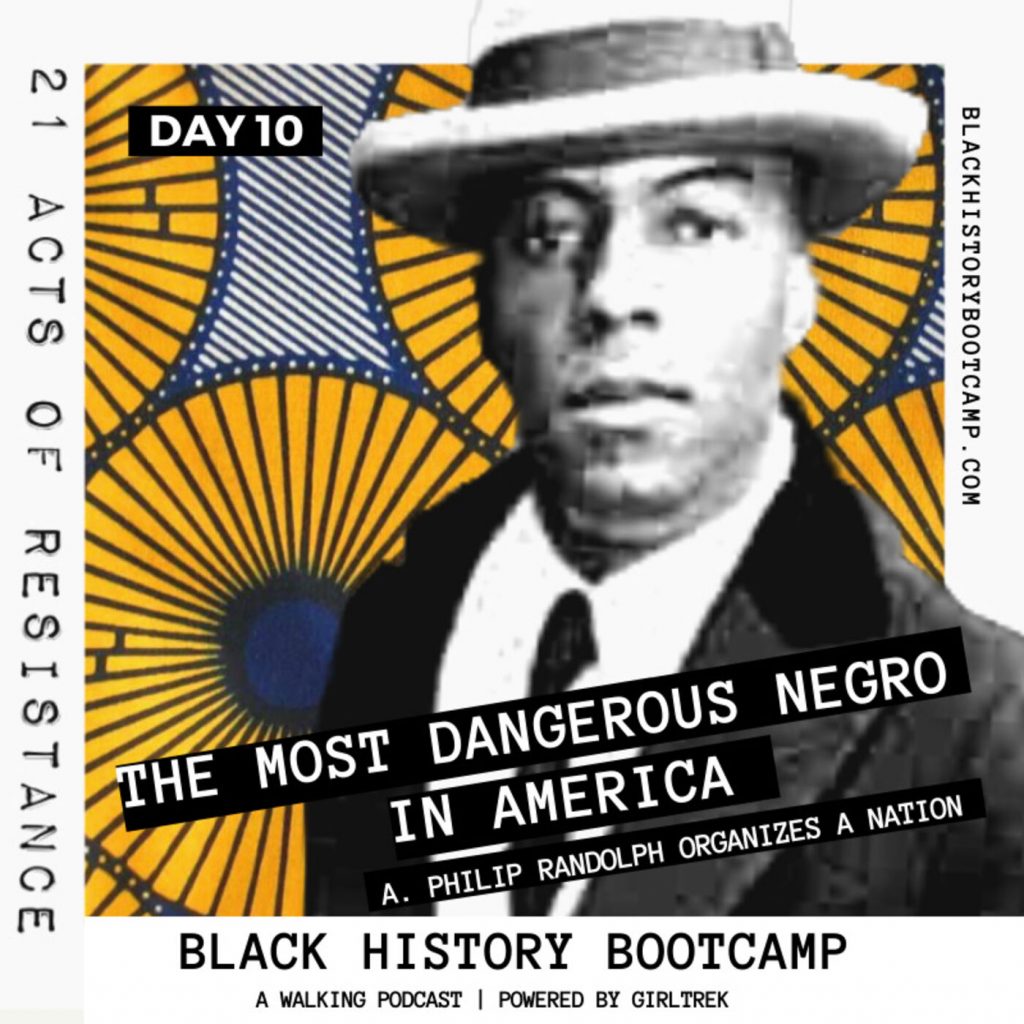 A. Philip Randolph was arrested in the streets for treason. He was a young man demanding rights for Black workers – or else. W.E.B. Du Bois and Booker T. Washington agreed on one thing. They could not stand the “new radical negroes” like A. Philip Randolph! He was a socialist. A rabble-rouser. A labor man. […] 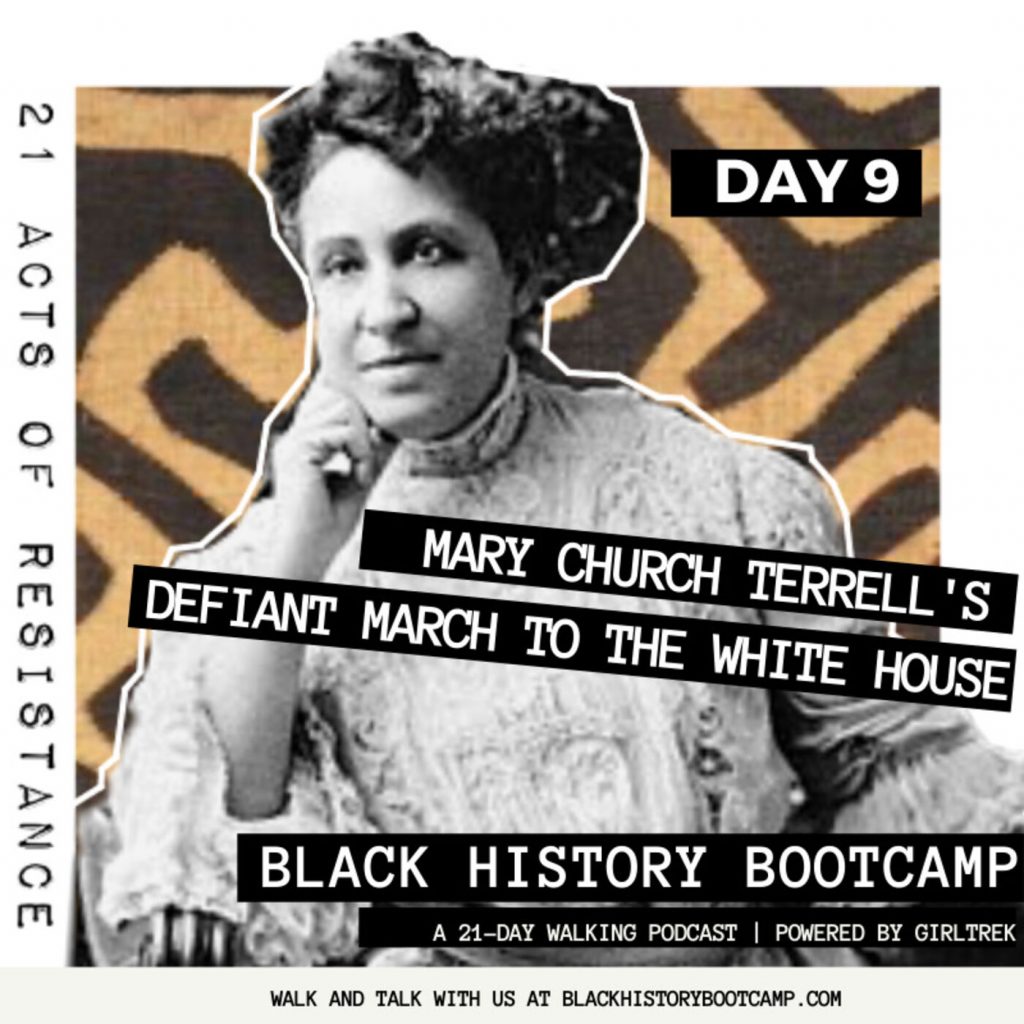 An educator, writer, political campaigner, and activist. Today’s walk is dedicated to the bravery of Mary Church Terrell, a woman who played a central role in every major movement to advance the rights of Black people in this country, including suffrage, anti-lynching, and desegregation. Coining the term, “lifting while we climb”, Mary Church Terrell was […] 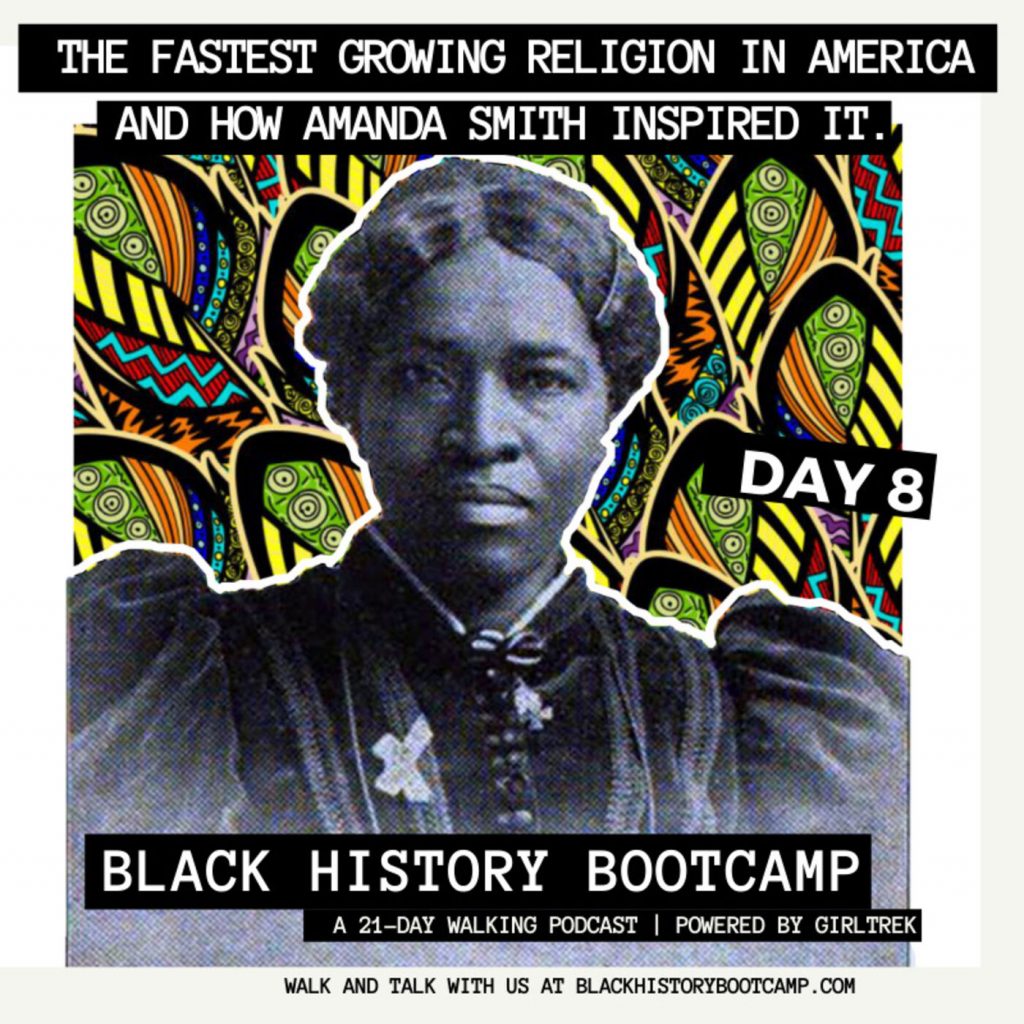 Can we talk about radical praise? Can we talk about transcendent faith? A Spirit that stretched from Africa to a tiny street in Los Angelos, California. Do. Not. Miss. Today! Take a praise break! I’m about to shout right now. God, I thank you for your grace. Today’s walk is dedicated to the unsung heroes […]

Today’s walk is dedicated to Nat Turner, the leader of the most famous slave uprising in the history of the United States. Nat Turner believed in signs and heard divine voices. On a summer night in August 1831, following a solar eclipse, Nat Turner, a Black man who had been sold three times in his […]

Resistance | Day 6 | Fannie vs. The President 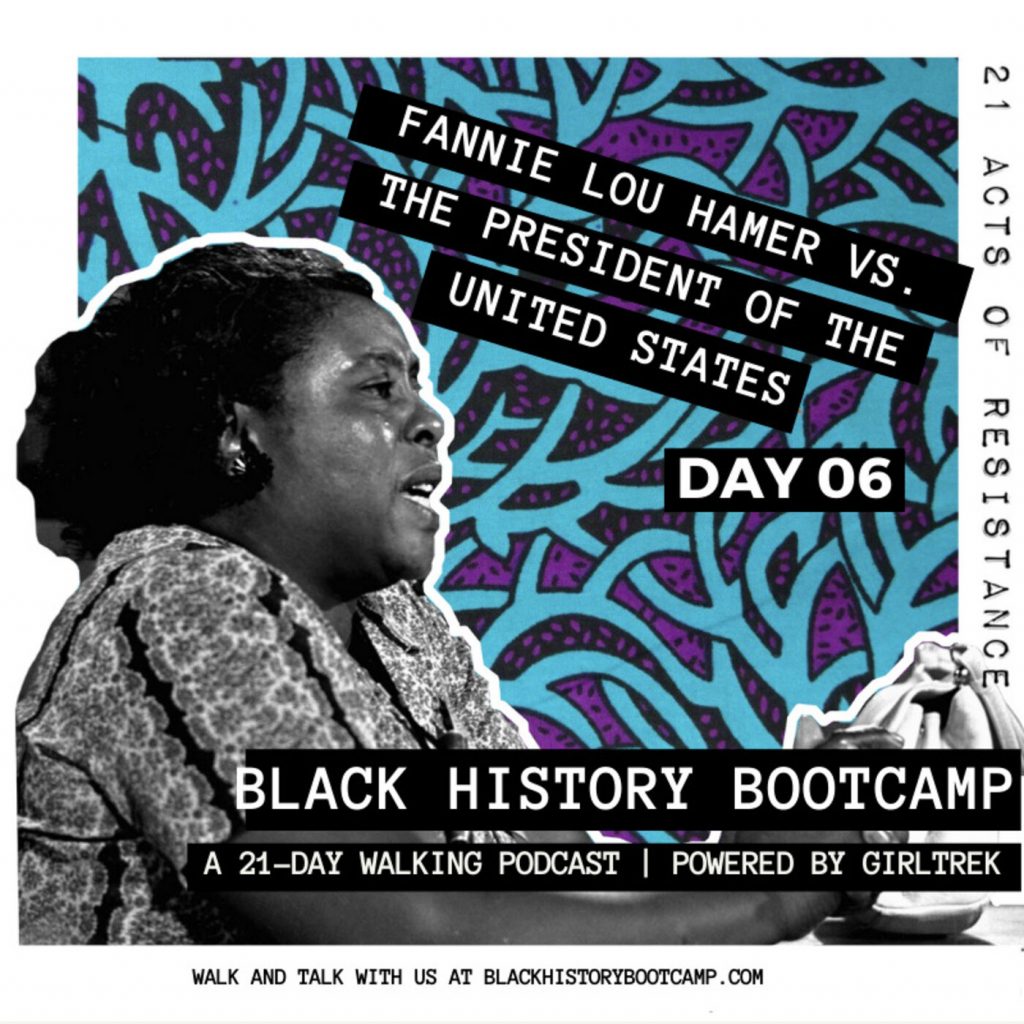 “Mr. Chairman… my name is Mrs. Fannie Lou Hamer, and I live at 626 East Lafayette Street, Ruleville, Mississippi, Sunflower County, the home of Senator James O. Eastland, and Senator Stennis. It was the 31st of August in 1962…” And that’s how it began. The most harrowing account of our hero being beaten in a […] 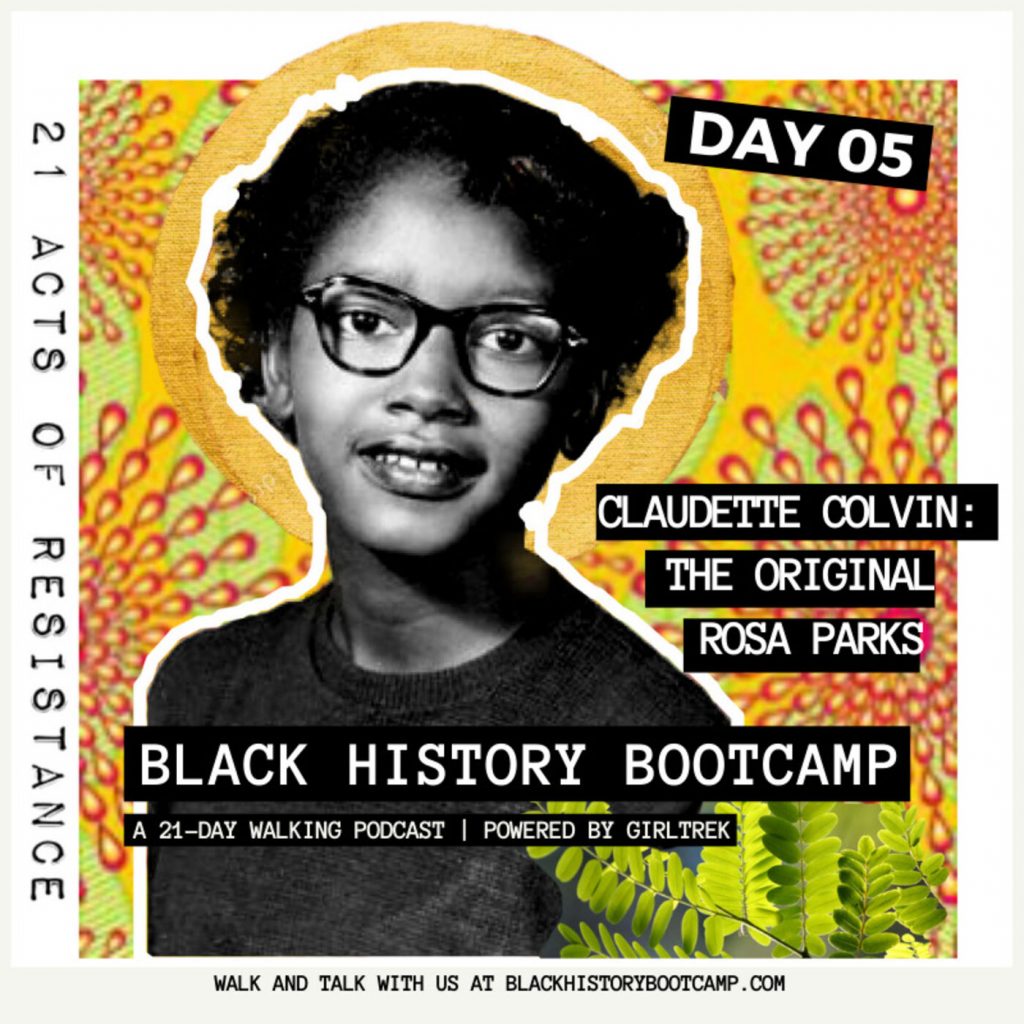 Today’s walk is dedicated to Claudette Colvin and every Black woman who has ever felt invisible or who has ever been asked to labor on behalf of a movement that did not welcome or celebrate you. Thank you for your service and the way you show up for your people. Today you are seen and […]

Resistance | Day 4 | Roots – The Blackest Movie of All Time 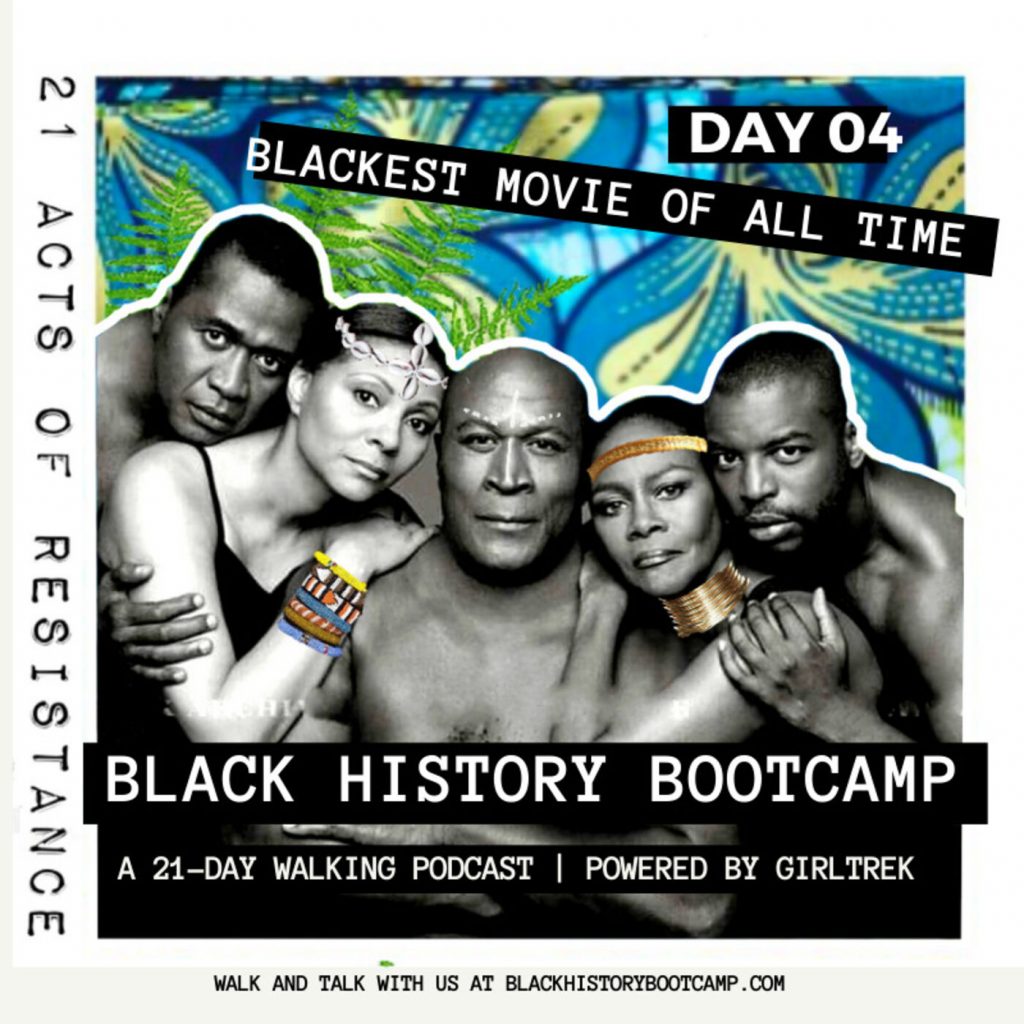 ROOTS CHANGED EVERYTHING, PERIOD. Today’s 30-minute walk is dedicated to the exact moment that millions of Black people held their breath, waiting… “Your name is Toby! Now, what’s your name boy?” Beaten, drenched, but unbroken, he threw his head back and inhaled. We inhaled with him. “KUNTA. KUNTA KENTE” Roots changed everything. A generation of […] 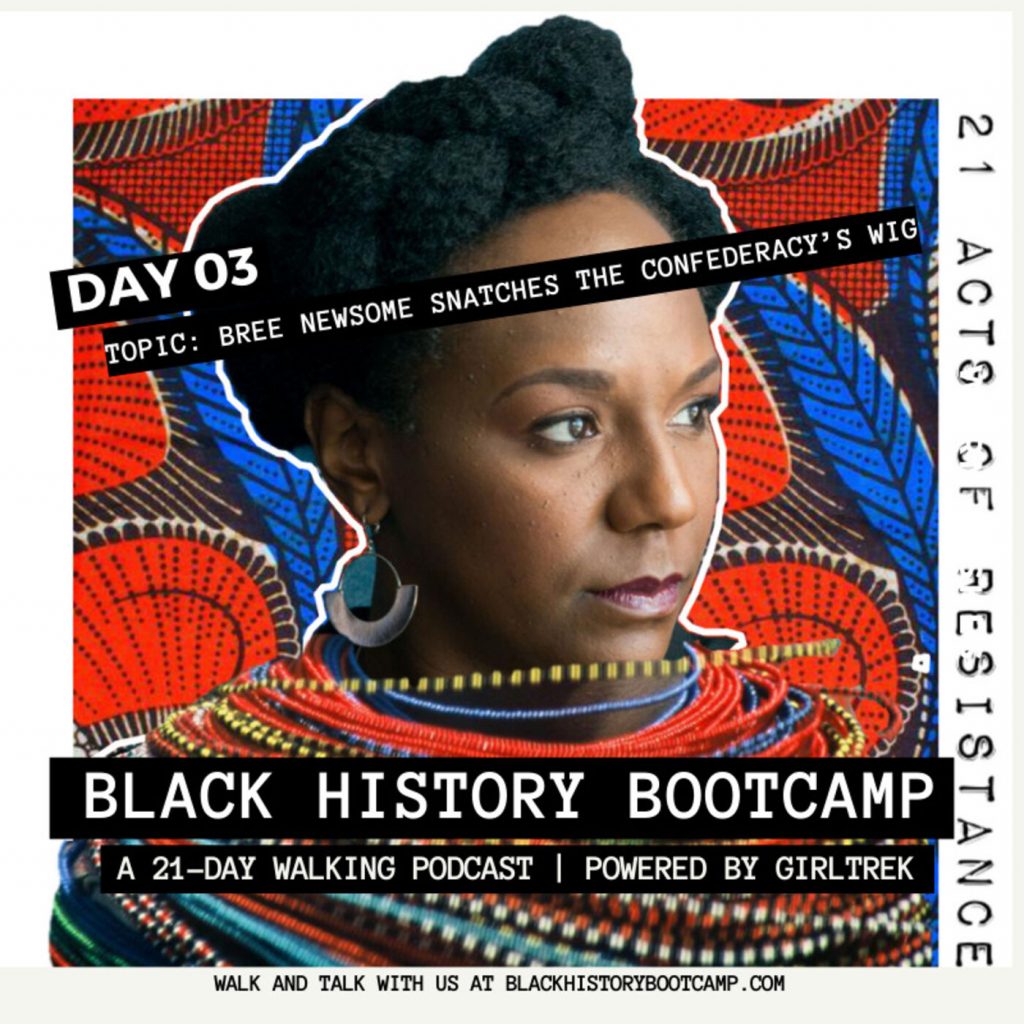 Today’s 30-minute walk is dedicated to a living legend, the fearless Bree Newsome Bass. On June 27, 2015, Bree Newsome committed one of the greatest acts of civil disobedience seen in our lifetime when she scaled the 30-foot flag pole on the grounds of the South Carolina State House and removed the confederate flag. Carried […] 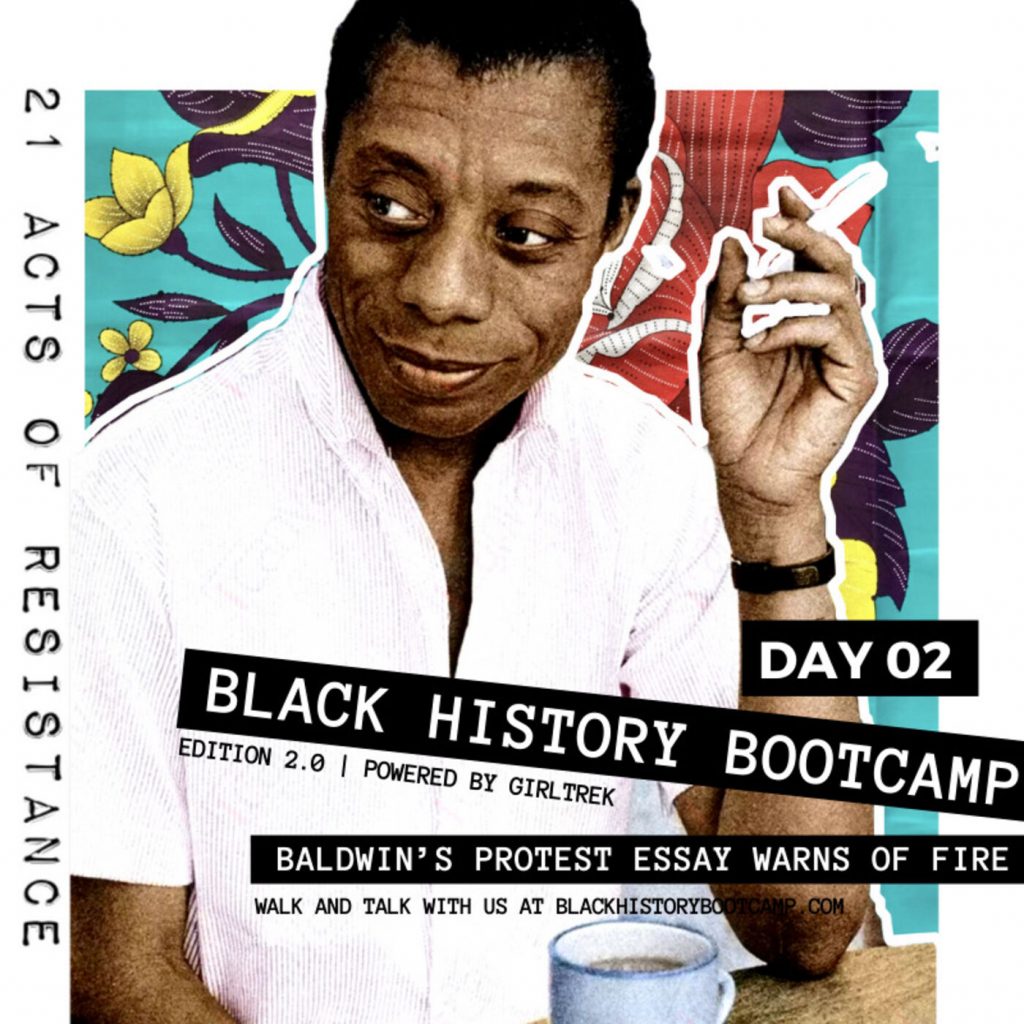 It happened on a Thursday. February 18, 1965. The exact moment we fell in love with James Baldwin. It wasn’t because he was a boy genius who spent every day at the library. It wasn’t event his fiery church sermons as a teen or loving debates with Malcolm X as a young man. It was […] 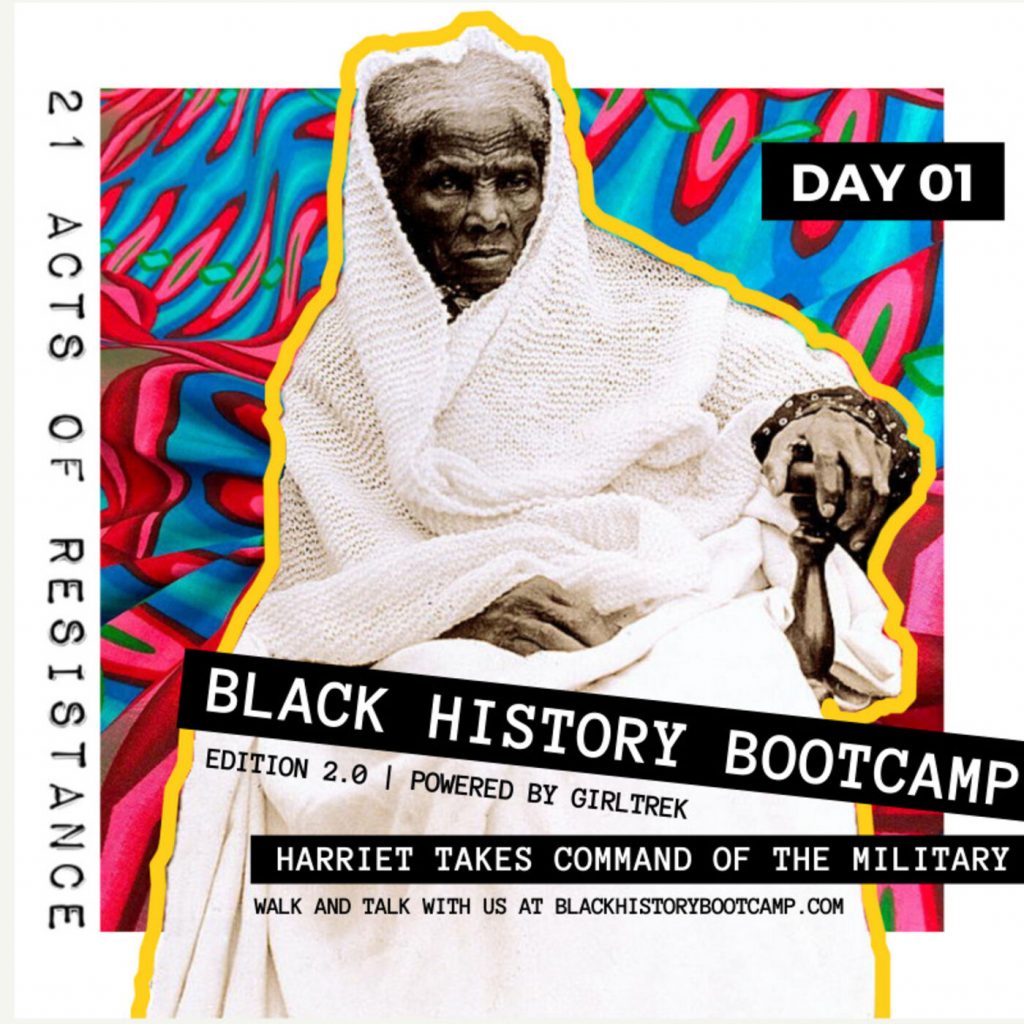